Marijuana and Dogs and Cats: A Risky Combination 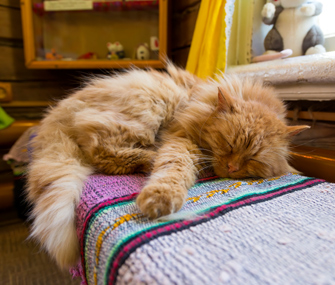 Marijuana exposure in pets, as reported to the ASPCA’s Poison Control Hotline, is becoming more frequent. Since 2009, calls reporting marijuana exposure have steadily risen by 50 percent. It is unknown if there truly is an increase in the number of animals who are exposed to the substance or if instead, with the recent legalization of marijuana for medical use in many states, people are just becoming more likely to admit that it has happened. Most reported cases in pets are due to the ingestion of marijuana plant materials or edibles, such as brownies and cookies, containing tetrahydrocannabinol (THC).

The most common side effects of marijuana intoxication are “drunkenness” (with pets appearing impaired and uncoordinated), sedation and urinary incontinence. THC and other cannabinoids affect the central nervous system, causing disruption of normal movement and behavior. However, about 25 percent of pets who ingest THC become stimulated instead — with agitation, vocalization and high heart rates as possible side effects. The most severely affected animals are typically the ones who have consumed marijuana edibles. These products can have very high levels of THC. There have even been some dog deaths reported after eating cookies or brownies made with marijuana butter because pets, unlike humans, think nothing of opportunistically wolfing down an entire pan of edibles.

While dogs are the most common pets to ingest marijuana, cats will eat the plant material. Because of their apparent lack of a sweet tooth, however, they are less likely to consume the more tempting edibles. After ingestion, pets can become affected in minutes to hours, and signs can last for hours.