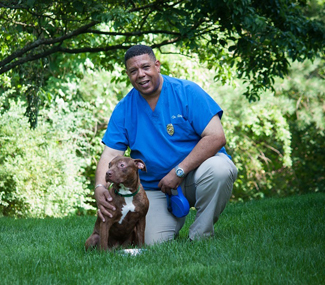 Call it CSI — for animals. The New Jersey Society for the Prevention of Cruelty to Animals’ newest hire is forensic veterinarian Dr. Ernie Rogers, DVM, Ph.D., an expert in investigating animal abuse and solving crimes against dogs, cats and the occasional alligator. He’s also the first employee with that title on the agency’s payroll.

At a time when few industries are gaining jobs, animal welfare officials say that veterinary forensics and animal crime scene investigators are bright spots in the field. The SPCA credits the upswing to shows like Animal Planet’s Animal Cops, as well as heightened media coverage of abuse cases.

As he joins the agency’s law enforcement division, we chatted with Dr. Rogers about what it means to be a forensic veterinarian — and the crimes against animal-kind he helps solve on a day-to-day basis.

Q: What type of training did you need to get into the field?

A: Dr. Ernie Rogers: "I went to medical school and got my degree in veterinary medicine, and then I got a Ph.D. in pharmacology and toxicology. I'd always wanted to work with the police force, so I started by working with police dogs.

Q: Why are we seeing an influx in animal crime scene investigations?

A: "People are becoming more and more aware of animal crime and how it affects their lives. A lot of animals that have been stolen out of yards have been used as baiting animals in dog fighting, for example. There's also 'trunking,' which is when they put two dogs in the trunk of a car and drive around. Then they open the trunk and the last dog living is the 'winner.' ”

Q: What does a typical day look like for you?

A: "I have a full-time veterinary practice, but when there is an incident, the police department will get in touch with me and say, 'Doc, I have this case. Do you think this is abuse?'

For example, there was a horse left out in a snowy field without any water, and the owner said, 'It doesn’t matter; he can eat snow.' But when I did the calculations, I realized that he would have to eat 250 feet of snow every day because snow is a lot less nutritious than water."

Q: What other unusual crimes have you investigated?

A: "We had a guy who stabbed his girlfriend’s cat to get back at her. People who do these things aren’t far behind doing other bad things. If you’re willing to take life from an animal, what else are you willing to do?

I had a case many years ago where an animal was shot in the head and it died instantly. I got the bullet, and when the officer took it to his lab, the forensic evidence tied the gun and bullets to two other human murders. I also have a case involving alligators and dogs. It’s an ongoing investigation, so I can’t say more, but that’s the most unusual animal I’ve had the opportunity to deal with."

Q: Do some people think of forensic vets as rock stars in the vet world?

A: Well, I think there’s been a thing put out there that’s a bit of a misnomer. Most vets put themselves in places where they want to help people, whether that’s law enforcement or healing a sick animal. I just happen to have a badge that helps me get into crime scenes."

Q: Do shows like Animal Cops help or hinder your job?

A: "It's good in some ways, and it’s bad in some ways. I know my partner will get called into a situation because one neighbor doesn’t like the other, so they'll call the animal cops to get him. In the other sense, some people are more willing to go out on a limb now and say, 'I saw my neighbor kicking his dog. He can’t walk, and he’s so emaciated.' ”

Q: Is there anything fun that comes with your new NJ SPCA gig?

A: "The NJ SPCA doesn’t receive tax dollars, so we appreciate anyone who can help us by raising funds. There is a 2012 calendar — and I’m actually in it. I have my clothes on though."