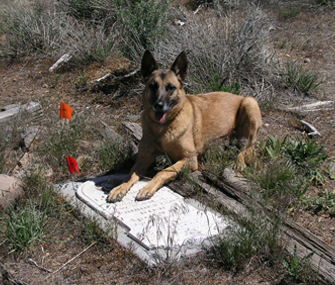 Thirty-one years ago this month, Raiders of the Lost Ark introduced the world to a globe-trotting archaeologist with a sixth sense for scavenging artifacts — and an intense fear of snakes. Although they don’t wear fedoras or carry whips, Historical Human Remains Detection (HHRD) dogs do share one thing in common with the intrepid Indiana Jones: an uncanny ability to determine where exactly those bones are buried at centuries-old sites.

Much like Human Remains Detection (HRD) and cadaver dogs, HHRD canines use their noses to get the job done. But instead of working with members of law enforcement, HHRD canines tag alongside archaeologists to sniff out historical and prehistoric graves.

Nose to the Ground Before Dawn

A typical day in the life of an HHRD dog varies depending on the location of the excavation site and the weather. Ideal conditions for an HHRD search: temperatures between 40 F and 75 F, high humidity, a moist ground and a light breeze.

In warm regions, like the western United States, where a number of HHRD dogs live and work, this means starting the day at 5:30 a.m., before the sun overheats the soil.

Bev Peabody, an HHRD dog handler and board member of the Institute for Canine Forensics (ICF), recalls working a site in the Sacramento Valley once when a ground thermometer read 110 F. “We doused the area with water and had to give the dogs lots of breaks,” she says.

“During certain times of the year, we have to worry about rattlesnakes,” Peabody says. “They come out in the summer, when the sun comes up, and lay on the rocks. You freeze when you hear that rattle. That’s our worst thing out here.”

And the work can be tedious, which is why Peabody says that the dogs usually work in teams of at least two. “Even if it’s a smaller area of two or three acres,” she says, “in order to cover it thoroughly, we have one dog sniff east to west and one north to south.”

How HHRD Came to Be

HHRD is a relatively new field. As more and more cases arose in which people needed to investigate centuries-old graves, some search-and-rescue handlers decided to start training their canines to specifically detect human bones and teeth.

The Institute for Canine Forensics (ICF), which certifies HHRD dogs, has determined that these dogs must specialize in detecting ancient buried skeletal remains — and not cross-train to detect live human scents.

Not only do HHRD dogs work some difficult terrain, but they also have to do so carefully to avoid disturbing possible graves.

To date, much of their work has focused on detecting old cemeteries and Native American burial grounds in western and midwestern parts of the U.S. Occasionally, the dogs even get to scent famous sites, like when they teamed up with the U.S. Forest Service to search a locale linked to the Donner Party.

In 2007, an HHRD dog and ICF handlers traveled to the Czech Republic to work two burial sites marked off by archaeologists. At one of the sites, an HHRD dog named Nessie surprised archaeologists and found a new burial locale. A month later, excavations proved Nessie was right.