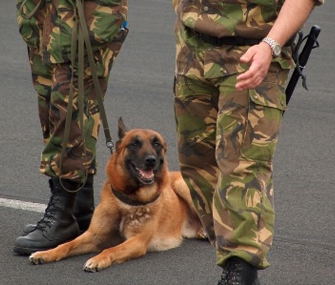 "After Duty, Dogs Suffer Like Soldiers." So read the headline on last week’s New York Times article on the subject of military dogs. The author’s point was one that veterinarians are working hard to cement in the minds of the powers that be in the military: Dogs are people, too.

At the very least, we’d like the military to consider that the psychological condition known as post-traumatic stress disorder (PTSD) is a form of psychological trauma that’s not just reserved for people. The fact that animals seem to suffer from it should lend credence to its claim as a disorder for humans and animals.

Interestingly, a significant percentage of military working dogs have been found to experience a similar set of symptoms after being exposed to the kind of stimulus that leads to PTSD in humans.

Here’s what the New York Times had to say, based on an interview with Dr. Walter F. Burghardt Jr., chief of behavioral medicine at the Daniel E. Holland Military Working Dog Hospital at Lackland Air Force Base:

"By some estimates, more than 5 percent of the approximately 650 military dogs deployed by American combat forces are developing canine PTSD. Of those, about half are likely to be retired from service," said Dr. Burghardt.

Although veterinarians have long diagnosed behavioral problems in animals, the concept of canine PTSD has only been around for several years — and it's still being debated. But it has gained popularity with military veterinarians, who've been seeing patterns of troubling behavior among dogs exposed to explosions, gunfire and other combat-related violence in Iraq and Afghanistan.

Much like humans with the disorder, different dogs show different symptoms. Some become hyper-vigilant. Others avoid buildings or work areas, which they'd previously been comfortable entering. Some undergo sharp changes in temperament and either become unusually aggressive with their handlers or clingy and timid. Many of them stop doing the kind of tasks they were trained to perform.

"If the dog is trained to find improvised explosives and it looks like it’s working, but isn’t, it’s not just the dog that’s at risk," said Dr. Burghardt. "This is a human health issue as well.”

The most interesting aspect of this issue — to me, anyway — is that pets are every bit as susceptible to the severe psychological stresses that affect humans. And this should come as no surprise to those of us who treat psychologically damaged pets every day.

In fact, it’s an issue that's been increasingly identified among many abandoned animals, long-term shelter pets and dogs who've been deprived of normal social situations, such as puppy mill dogs. These animals show symptoms that most consistently match those of human PTSD patients.

In fact, there was an interesting study presented at the Purebred Paradox conference last March on the symptomatic similarities between puppy mill dogs and human PTSD sufferers.

This implied connection should in no way serve to minimize PTSD in humans. Indeed, it’s my hope that a well-documented observation of a similar phenomenon in animals (who have no political stake in the matter) further helps to bring home the reality that war is hell on everyone involved. And animals clearly suffer just as humans do when they’re forced to experience its ravages.

Sure, it’s my contention that human hubris (and maybe some wishful thinking) keeps us from contemplating the often unfortunate animal welfare consequences of using canines in warfare. But that doesn’t necessarily mean we shouldn’t utilize animals in the course of war — as long as we are aware of what we’re doing and we take steps to limit the impact of war on the psyches of all who defend us.

If our military dogs manage to minimize human injury, loss of life and psychological impairment, then I can get behind the idea of using them in military operations. Nonetheless, this doesn't mean we shouldn't develop strategies for preventing PTSD in military and other working dogs.

In fact, now that we've recognized PTSD as a very real concern among our militarized canines, I see it as a moral imperative that we address the problem.

What's your take on the topic? Do dogs deserve the same kind of help as humans when it comes to dealing with PTSD?