Most Popular Kitten Names of 2012 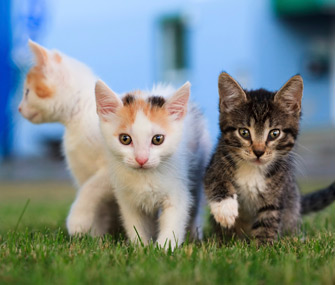 Using Vetstreet's records, we've looked over the names of more than 643,000 cats born in 2012 to determine the year's top pet names.

As we sorted through this data, we saw that some of last year’s trends remain very much in play. Although this year’s top 10 list doesn’t feature many newcomers, we still came up with a few names to watch.

A few of the names on this list — like Max, Oliver, Charlie, Jack, Leo, Bella, Lucy, Chloe, Sophie, Lily and Lilly — might sound very familiar … as names of people you know, not necessarily for cats. But when you consider the fact that many cat owners consider their felines members of the family, it makes sense.

Bella first hit No. 1 on the list of female cat names in 2007, just a couple of years after the first book of the Twilight series came out. Luna and Lily are also names found in popular culture — both names are found in the Harry Potter books, and Lily is also a main character in the Gossip Girl television series. Simba, of course, is the name of the star of The Lion King, and although the movie isn’t what we’d consider a recent release (1994 was quite a while ago), its current popularity on Broadway is more than enough to make it relevant. 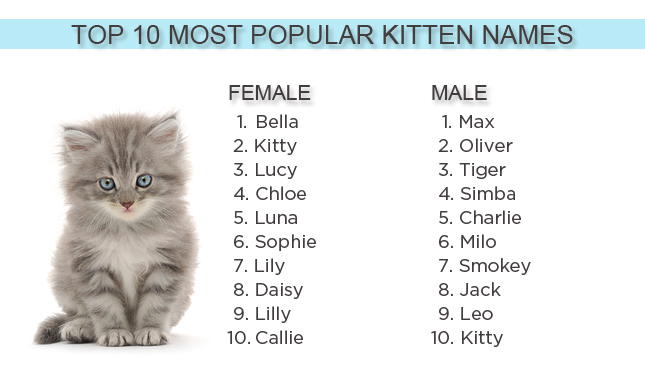 Some names just seem to suit our cats. Kitty, which appears on the list for both male and female cats; Tiger, the No. 3 pick for males; and Smokey, the No. 7 male moniker, are names that have long popped up on these lists, and we’d be surprised to see them go away anytime soon. That being said, last year’s No. 9 male name, Tigger, fell off the list in 2012, so anything can happen.

Katniss, the name of The Hunger Games’ heroine, hasn’t cracked the top 10 but is swiftly on the rise. Also gaining popularity are Loki and Thor, likely because of the enormous popularity of The Avengers earlier this year. Other names to keep an eye on are Stella, Willow, Rosie, Minnie, Oscar, Louie and Blue.