Most Popular Kitten Names of 2013

We recently released our list of the year's most popular puppy names, but, of course, we identify as neither dog nor cat people (seriously, do not ask us to choose sides!), so we now present to you the most popular kitten names of 2013.

Just like in 2011 and 2012, we examined Vetstreet's database of 425,000 names of kittens born this year to find the monikers that appeared most often. Many of the trends of the last couple of years are holding true, but watch out: There are a number of names moving up and down the list this year, including a new No. 1 name for male kittens! 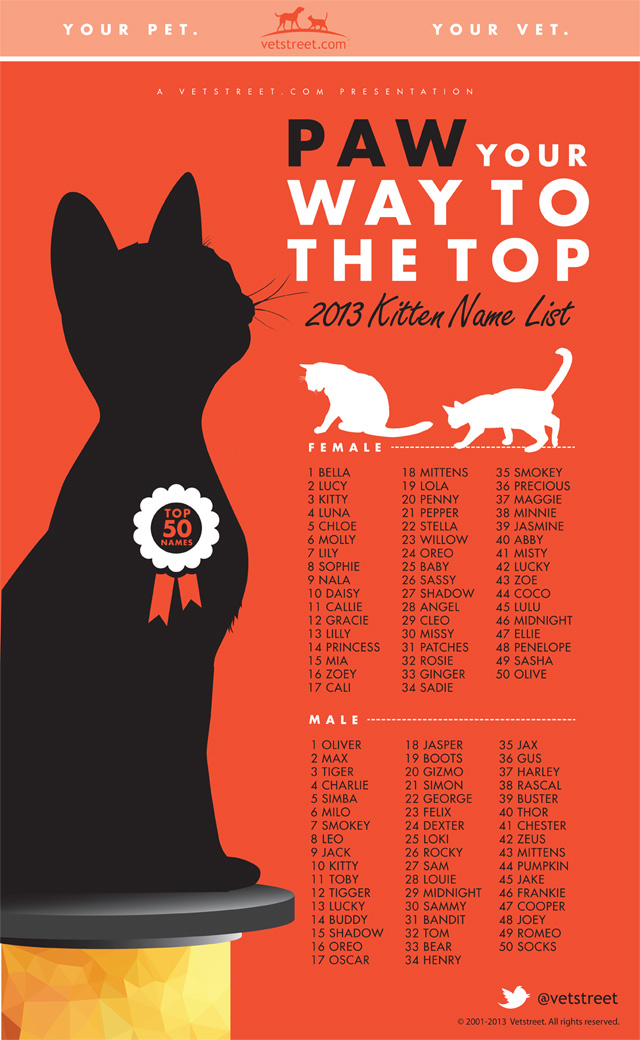 For the seventh year in a row, Bella is sitting pretty at No. 1. But we have a new No. 2: Lucy, which has been in and out of that spot, holding it for six out of the last 11 years.

Luna, which nabbed No. 4 this year, has risen in popularity every single year over the past decade, and Molly entered the top 10 with feeling, jumping from No. 11 last year to No. 6 in 2013. Also joining this elite list for the first time is Nala, taking No. 9 after landing at No. 13 last year. Daisy rounds out the list, while Callie and Lilly fell out of the top 10 altogether. 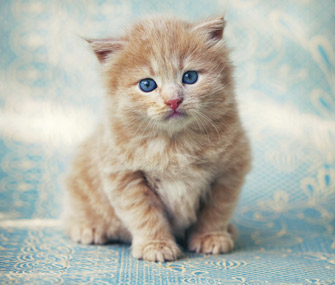 After a five-year stint at No. 1, Max dropped to No. 2 and handed over the reins (which we imagine to be covered in feather and ribbons, given the fact that we're talking about kittens) to first-time winner Oliver.

Despite the excitement of a new No. 1 name, there weren't many other changes from last year's top 10 list. No new names were introduced, and other than the aforementioned names, only Charlie and Leo moved up one spot, while Simba and Jack fell a place.

Luna is definitely one to watch, considering its steady upward movement and the fact that, a decade ago, it wasn't even in the top 50. Mittens is also on the move. Although it didn't make the top 10, it leaped from No. 28 to No. 18 in just a year. And, with an even bigger step toward the top of the list, Pepper went from No. 42 to No. 21, so it looks like we could be seeing a little shaking up in the top 10 and top 20 lists in the coming years!

Kitten and Puppy Names in Common

Cat people and dog people may disagree about, well, nearly everything, but they share some interesting common ground when it comes to names. We noticed quite a few similarities, particularly among the females. For one thing, Bella was the top female name for both puppies and kittens, and Max was a top performer on both lists as well, ranking No. 2 on the kitten list and No. 1 for puppies.

Other names both top 10 lists shared were Lucy, Chloe, Molly and Sophie for females and Charlie and Jack for males.

Of course, there were a number of names that made the top 10 of one list but didn't reach the top 15, top 20 or even top 50 of the other: Unsurprisingly, Kitty, which was in the top 10 for both male and female kittens, didn't make the top 50 puppy names list at all. Tiger, Simba and Smokey were other top 10 kitten names that didn't find a spot on the puppy names list, while Duke and Bentley, top 10 puppy names, were unaccounted for in kitten names.

Some of the trends we've noted, like using traditional human and classic pet names, appear to remain true heading into 2014. We can't wait to see whether new trends and popular pet names emerge in the next few years!