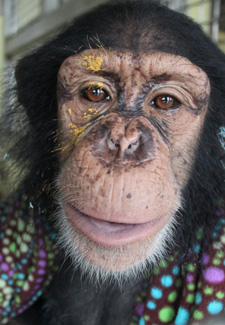 Photo courtesy of Save the Chimps
Dylan, one of the rescued chimps, after some painting.

Last October, Terry the chimpanzee found himself without a home when the Las Vegas Zoo — where he had been living without any chimp companionship for 18 years — closed its doors. Jen Feuerstein, director of Save the Chimps, a Fort Pierce, Fla., chimpanzee sanctuary, was alerted to Terry's situation by “a flurry of text messages” from the North American Primate Sanctuary Alliance. Feuerstein traveled to Las Vegas to meet Terry, and within days he was on his way to a new life. Today, Terry lives at Save the Chimps with 250 other chimpanzees retired or rescued from animal testing labs, unaccredited zoos, breeding facilities and the entertainment industry.

The Story of Save the Chimps

While Terry's rescue made headlines across the country, Save the Chimps has been living up to its name since 1997 when founder Dr. Carole Noon, PhD, decided to construct a sanctuary — and create a new life — for former U.S. Air Force research chimpanzees who had been deemed “surplus equipment.” Noon, who died of pancreatic cancer in 2009, rescued hundreds of chimps during her tenure at Save the Chimps. A new book by conservationist Gary Ferguson, Opening Doors($24.95), tells the amazing story of Noon and Save the Chimps.

Overflowing with engaging photos and fascinating asides about life at Save the Chimps, Opening Doors begins with the story of how Noon came of age at the same time as America’s space program. Chimps figure prominently in both of these narratives. Many of the Air Force “Astrochimps” originally obtained for space training were eventually leased out to laboratories for disease studies — or worse — and it was this that led Noon to her life’s work. Ferguson traces how Noon’s passion for chimps broke down bureaucratic and legal obstacles to rescue these animals and give them a loving home. Save the Chimps offered a second chance for animals deemed too afraid or even too brain-damaged to socialize with each other. Ferguson shares the heartwarming stories of how these animals formed chimp families for the first time at the sun-drenched sanctuary Noon’s persistence built.

Feuerstein, who worked with Noon before her death, says her favorite part of Ferguson's book is the first chapter, which details the life of the extraordinary founder of Save the Chimps. Noon “didn't talk much about her childhood or even her early professional years," Feuerstein says. "Her mind was solely on chimps and the present job at hand. I enjoyed reading about other people's memories and stories of her, which helped to bring her back to life in my mind.Ialso love all of the photos — they capture the beauty and personalities of the chimps so well.” 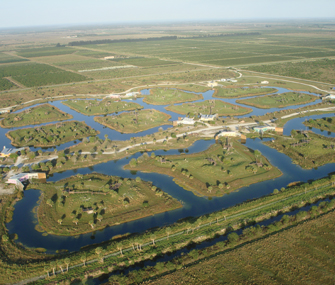 Making a Difference for Chimps

The work Noon began when she founded Save the Chimps is not finished yet, although things have changed. Conditions are improving for chimps in captivity, Feuerstein says, because “folks are learning how the chimps are treated in these industries, and they don't like it.” The number of chimps exposed to potential abuse and neglect is declining, in part because actors, writers, advertising agencies and corporations are pledging to not use live trained chimps in film or advertising. In addition, the National Institutes of Health announced last year that it would significantly reduce the use of chimpanzees in research and would retire some 300 chimpanzees. That's a step in the right direction, but there's more work to be done, Feuerstein says. “Out of the 2,000 or so chimpanzees in captivity in the U.S., probably about half are in need of better living conditions and/or better care and treatment.”