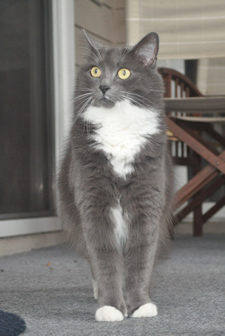 So how did I wind up following my crafty inner voice? The folks at Purina ONE, who have been putting a lot of time and effort into enriching our feline friends' lives through various types of play and puzzles, reached out to me with some examples of feline food puzzles that could easily be made from materials already on hand. In fact, they sent me step-by-step instructions for assembling the puzzles. How could I resist? And — more important — how could I fail?

"I can't possibly screw this up! I'm in!" I said to myself and my cat. And I was sure it was going to be a smash. It just looked so simple, and of course Trixie would love it!

(There was, of course, absolutely no guarantee that Trixie would love any of this. The only things she loves with any predictability are her dangly feather wand toy, making biscuits on my feet at 3 a.m., and stalking and scaring the dog — who outweighs her by over 30 pounds. But that's not to say I haven't tried to get crafty on Trixie's account. Once, shortly after we adopted her, she found a box she loved to lie in, so in order to make it more "special," I wrote her name on it in block letters. She never so much as looked at it again.)

So how did the DIY food puzzles go? Well, the crafting part was a breeze. I organized my sanitized bottles and all the other required materials and prepared myself for the sight of Trixie joyously playing with her new toy — and showering me with love and thanks, of course, because naturally she'd know I'd made it just for her and be eternally grateful, right? Isn't that how cats work?

My expectations may have been too high.

I removed the label from the first bottle. I carefully cut holes in it. I tossed in some kibble and even a few treats — just on the off chance that Trixie wasn't sufficiently tempted by the puzzle itself, or the food inside it. 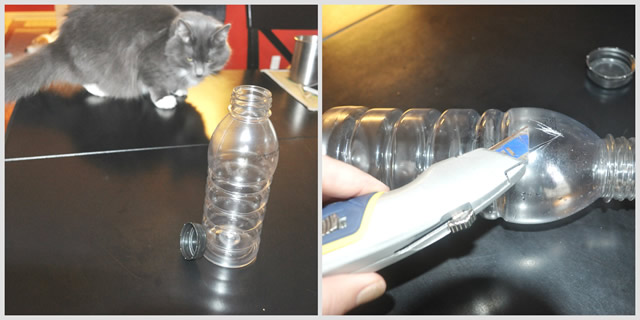 And then, I presented the finished puzzle to her. And I waited for her to start batting it around and delighting in the fact that she could basically hunt her own food! 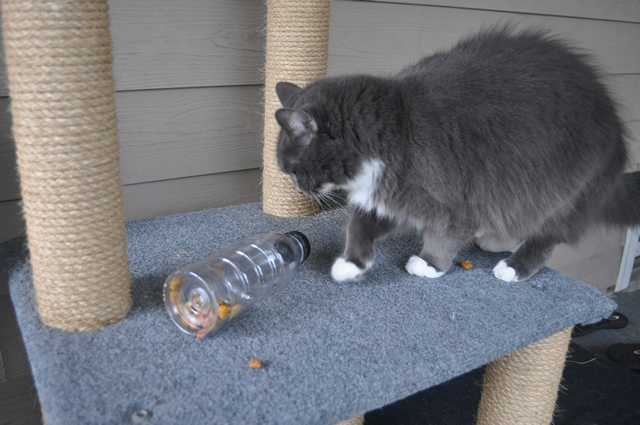 Credit: Kristen Seymour, Vetstreet
It might look like she knocked some food out, but no, that was me. And she didn't even bother to eat the morsels that had already gotten loose, let alone actually make it happen for herself.

"Maybe she's just not comfortable with it up there on her perch," I thought to myself, so I secured the dogs in another room (because this was Trixie's treat, not theirs!) and moved the puzzle down to the floor. And waited some more. 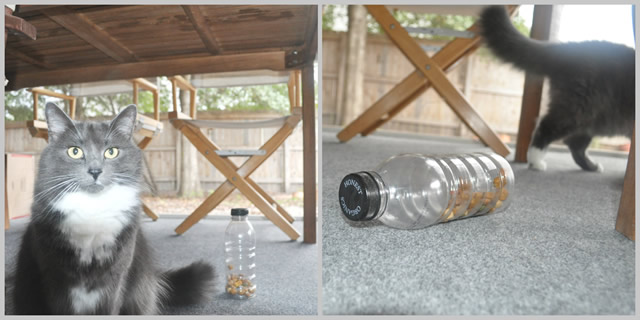 Credit: Kristen Seymour
"Woman, what is it you expect me to do with this, exactly?"

Unfortunately, Trixie had other ideas — which did not involve playing with the food puzzle. On to Project #2: The Reach Box Feeder.