Pet Again: Whether to Reuse or Retire Your Former Pet’s Treasures 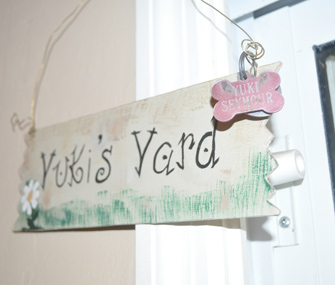 Kristen Seymour
Vetstreet editor Kristen Seymour keeps the tag of her late Lab mix, Yuki, hanging in a special place in her home.

When our very own Vetstreet editor, Kristen Seymour, lost her beloved Black Labrador mix, Yuki, she tucked the pup’s favorite pirate collar away for posterity. It wasn’t until almost five years later that she was able to pull the adorable item back out and fit it on her current dog. “It was just too painful,” she shares. “We still keep [Yuki’s] tag hanging in a special spot, near our back porch.” Seymour is not alone. Once we lose a pet, many of us struggle with whether to stow away favorite items as keepsakes, repurpose them for future animals or donate everything and start fresh. According to Certified Compassion Fatigue Educator Dr. Carrie La Jeunesse, DVM, CT, who helps people cope with pet bereavement, there’s no right or wrong way to handle the grieving process. Both mourning approaches — holding tight to these reminders or letting them go — can be healing. “This is a personal decision by the owners,” she explains. “Each person’s experience is unique.”

Indeed, pet owners seem to find their own ways to move on after losing adored companions. Those coping mechanisms can range from bestowing the same name on a new animal to keeping one special toy aside as a reminder.

Reusing the same pet moniker is more common than one might imagine, and the reasons to do it are myriad. “For some, it’s to honor the first pet with that name,” Dr. La Jeunesse says. “Some [may] like the name. Some just think it’s a quirky practice.”

Just as people honor previous generations by naming a child “Junior” or “III,” some animal owners adopt family pet names. When Bill Monro of Los Angeles was growing up, his grandparents, Peggy and George Monro, named several successive Shih Tzus “Me Too.” “Technically, they were Me Too, then Me Too 2, etc.,” he recalls. “And they did not get all new dog stuff for them. They were sentimental about having a Shih Tzu named Me Too, but [less] about the individuals.”

Sometimes the multiple-pet-same-name ritual becomes a habit within an extended family, too. Fifteen years after her childhood dog passed away, Jennifer Showell-Hartogs of Virginia named her pup, George, after her (also a female). She wasn’t alone in choosing the same name multiple times. “My grandparents and sister have both named successive pets the same name,” she says. “Two cats named Thomas and three or four fish named Tishy.”

A pet’s premature departure can inspire honorary naming as well. Miami’s Rosibel Mejia had a Border Collie-Labrador mix named Camila, who tragically died just weeks after she arrived. Mejia kept the first dog in mind when she got her next pup. “We really loved her and mourned her,” she says. “So, we varied the name enough to honor Camila but also keep the individuality of our [new dog], Mila.”

This strategy can prove quite comforting. When Richard Taber of Brooklyn was 12 years old in California, he had a calico cat named Patches (eventually Patches 1), who got pregnant. Two weeks after she gave birth, disaster struck, and all kittens but one died. "Patches 1 left the next day, never to return. We named the only survivor, the lone calico of the litter, Patches 2, after her mother.”