Dec. 26, 2012: We've scoured the Web to find the best and most compelling animal stories, videos and photos. And it's all right here. 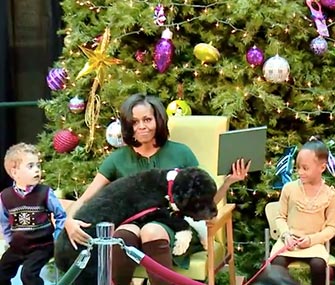 During a traditional visit to the Children’s National Medical Center in Washington D.C., first lady Michelle Obama read ‘Twas the Night Before Christmas. As she started the story, someone jumped up in her lap. No, it wasn’t one of the children. But it was a 4-year-old — her Portuguese Water Dog, Bo. “This is exactly what he does at home — he tries to beat Malia and Sasha to my lap,” the First Lady said, as the audience laughed. “You see, Bo?” she asked at one point in the story, as the little girl beside her was concerned that the pup couldn’t see the pictures. “He knows the end of this story,” the first lady reassured the kids. The pair made the visit on Dec. 14, but the White House posted the merry video on Christmas Eve. — Watch it on YouTube and see how Bo inspired the White House Christmas decorations

If you’ve always wondered about your cat’s genetic makeup, a new test might be able to help you find the answers. At the University of California’s Feline Genetics Laboratory, the Cat Ancestry test can determine whether your kitty is one of 29 major breeds. Using a cotton swab to collect DNA, the test traces the cat’s lineage and provides results for common physical traits, including coat color and fur length, and could help owners be aware of what diseases their pet might be at risk for. The test costs $120 and can be ordered online. — Read it at the Huffington Post

Minnesota Tries to Bring Back Moose

The iconic moose of Minnesota have been disappearing. Some people blame it on climate change, parasites and predators, but the cause remains mysterious. The animals have largely disappeared from the northwestern part of the state, where they were once abundant. Now, Minnesota has labeled the moose a species of “special concern.” In January, a private company hired by the state will fit 100 moose with GPS tracking collars to learn more about the reasons for their decline. — Read it at the LA Times 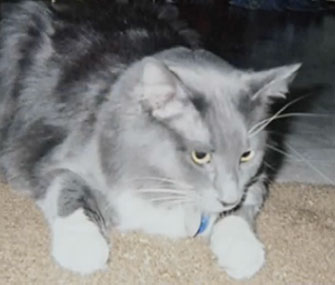 AZ Family
After seven years, Sophia will be reunited with her owner on Wednesday.

Missing Cat to Be Reunited With Owner for Holidays

Phoenix resident Tricia Osterman got the best — and most unexpected — Christmas present she could have hoped for. Her cat, Sophia, who’d been missing for seven years, was found in San Diego, 350 miles from home. Osterman was shocked to get a call from the San Diego Humane Society saying that they’d found Sophia, and located her owner using a microchip. But Osterman couldn’t afford to get her cat back home. “I was in tears when they called me on the phone,” Osterman said. The group wanted the cat to be home for the holidays, and booked a flight for her to be reunited with Osterman on Wednesday. — Read it at AZ Family

It’s a bear baby boom at the D.C. zoo! Just days after its Andean bear gave birth to twins, its 18-year-old sloth bear, Hana, had a baby of her own. Hana had the baby on Dec. 19 — which happens to be her own birthday. The zoo says mom has been “very attentive,and the cub has successfully nursed.” Keepers are monitoring the two via closed circuit TV camera. — See photo on Facebook and watch video on Flickr

Plus: We couldn’t leave out this adorable zoo baby. A 2-month-old Persian leopard cub made her public debut at the Augsburg Zoo in Germany, looking like she was ready to give her loving fans a hug! — See photo at People Pets