Nov. 2, 2012: We've scoured the Web to find the best and most compelling animal stories, videos and photos. And it's all right here. 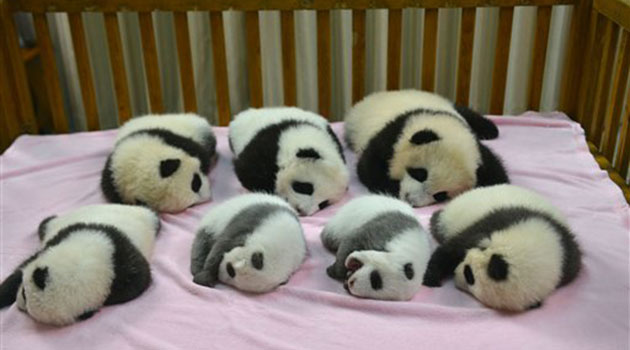 AP
China's celebrating the births of eight panda cubs, including these seven who were born at the Chengdu Panda Base.

After a tough week for humans and animals alike thanks to Hurricane Sandy, we’re bringing you good news — and a crib-full of panda cubs! Seven cubs, shown here, were born at the Chengdu Panda Base in China, which is the world’s largest panda reserve. The eighth was born at the Wakayama Adventure Zoo in Japan, to a mom from Chengdu. The reserve says that the oldest cub was named Oreo by Rebecca Revich, a lawyer from Los Angeles, who is a participant in Chengdu’s “Pambassador” program, which highlights panda conservation efforts. The other cubs’ names are: Xiao Qiao, Si Yi, Yuan Run, Miao Miao, You Bin, and twins Cheng Shuang and Cheng Dui. All of the cubs are in good health, and the seven who are living at Chengdu were photographed for the first time this week. — Read it at Discovery News

The official presidential election may still be days away, but at the Washington Animal Rescue League, the results are in. Barrrk Obama (the dog) beat Mitt’ns Romney in a straw poll fundraiser, with 3,129 votes to the kitty’s respectable 2,722. But in this fundraiser, everybody wins. Votes were $1 each, so the shelter raised $5,851 — and both candidates got the ultimate prize: they’ve been adopted. — Read it at the Huffington Post

Get in your Batmobile — and bring your camera. The Lincoln Park Zoo’s Urban Wildlife Institute is asking the public to help it track bats in the Chicago area. Residents can email their photos to the zoo, which conservationists hope will help them monitor the population and possibly get insight into white nose syndrome—a disease that has decimated bat populations further east, but hasn’t yet been found in Illinois. — Read it from AP via Illinois’ Daily Journal 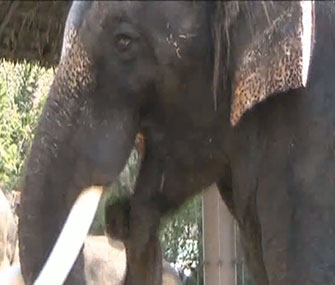 Elephant Can Say “Hello” in Korean

In a process even scientists don’t fully understand, an elephant at a zoo in South Korea is able to use his trunk to say the words "hello," "good," "no," "sit down" and "lie down." The pachyderm likely doesn’t understand the meaning of the words he’s saying, though, researchers said. Koshik “talks” in an unusual way, by putting his trunk inside his mouth. "Where there's a will, there's a way,” said researcher Angela Stoeger-Horwath of the University of Vienna. “Koshik's drive to share vocalizations with his human companions was so strong that he invented a whole new way of making sounds to achieve it."

Koshik was the only elephant at the Everland Zoo for several years, and scientists think he may have developed this way of imitating human speech as a way of being social. The researchers’ findings on this talking elephant were published in the journal Current Biology. — Read it and watch it at Live Science

It pays to belong to the founder of Facebook. Although Beast Zuckerberg had been slacking off on posting photos to his fan page in the months since his humans, Mark Zuckerberg and Priscilla Chan, got married, this week the 1-year-old Puli shared a photo of a big treat with his 1 million fans. "My new bone is almost as big as I am," Beast wrote in the caption. Lucky dog. — See the photo at People Pets