March 5, 2012: We've scoured the Web to find the best and most compelling animal stories, videos and photos. And it's all right here. 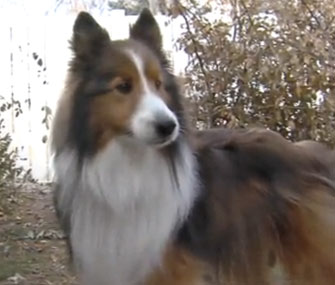 KSL
Dooley is back at home following a harrowing 53 days in the desert.

Barbara Bagley lost her husband and one of her dogs in a tragic December car crash. But her spirits were lifted two weeks ago when her second pup, a 4-year-old Shetland Sheepdog named Dooley, was tracked down in the Nevada desert. The dog was actually spotted several times, but he eluded capture until two searchers finally managed to corner him.

Dooley, who lost more than half his bodyweight while living on roadkill, is gradually regaining weight and going for regular walks with Bagley. "I was overjoyed that I was going to have him back in my life. I think he felt the same about me," said Bagley. — Read it at the AP via the Las Vegas Review-Journal and watch the video from KSL

Study Finds That Dogs Can Transmit Norovirus to Humans

Recent research shows that dogs can transmit human strains of norovirus to owners. The virus, which can cause vomiting and diarrhea in humans, can also show up as mild symptoms in dogs. Researchers believe that canines most likely contract the virus through contact with young children. — Read it at DVM 360

It's Iditarod Time Again in Alaska

Fans gave a big send-off to 66 mushers and their dog sled teams as they took off for the 1,000-mile, eight-day trek through Alaska. The winner of the 40th “Super Bowl of mushing” will get $50,000 and a new truck. — Read it at the and see the preview video from Iditarod

Horse in the U.K. May Be the World’s Oldest

At 51, a thoroughbred named Shayne is believed to be the world’s oldest horse, but the owners of the U.K. sanctuary where he’s spending his retirement years haven't received the official title because they don’t have Shayne’s birth certificate. “He is still very active; sometimes we forget how old he is,” said one of the sanctuary’s founders. — Read it at Today

Inside the World of Competitive Guppy Breeding (You Heard Right.)

There are competitions for dogs, cats and even rabbits. But guppies? In a recent article, The Washington Post profiled Bill Carwile, a Virginia man who’s been breeding the little fish for competition for more than 20 years. — Read it at the Washington Post

Changa, an adorable 2-month-old antelope, explored her enclosure at a German zoo with her mom last week. — See the photos at Today