June 27, 2016: We've scoured the Web to find the best and most compelling animal stories, videos and photos. And it's all right here. 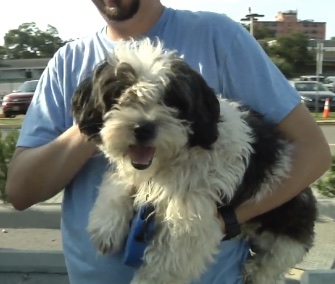 Fox 13
Max was happily reunited with his owner after his escapade on Friday.

A runaway dog was reunited with his owner Friday night thanks to some caring drivers on a busy Tampa highway. They spotted the pup running in the roadway with his leash still attached, and slowed down to create a shield so he couldn’t get away. Then one driver, Carlos Ramos, jumped out to save the pooch, plucking him from a railing he’d jumped up on. It turned out that little Max was in a car with his owner’s daughter, Hannah Kelley, and her fiancé when they were involved in an accident, on a road just off the expressway. The scared dog took off running, and Hannah insisted her fiancé go searching for him even though she’d been injured. Ramos used social media to try to find Max’s owners, and it worked. Kelley was reunited with the dog, who was unharmed. “If I had a million dollars, I'd give you a million dollars,” Kelley told Ramos and his girlfriend as he was reunited with Max. — Watch it at Tampa’s Fox 13

It looks like the New England cottontail, the region’s only native rabbit species, is hopping into better days. The bunny’s numbers have declined by more than 75 percent since 1960, due to loss of habitat. But captive breeding and reintroduction efforts seem to be working. On Patience Island in Rhode Island, the population has doubled to more than 120. The New England cottontail needs a young forest to live in, so conservationists have identified the best locations for them and have been working to maintain the shrub layer the rabbits need in those areas. — Read it at New England Cable News


Study: Monkeys Choosier About Friends as They Age

If you’ve become more selective about who you spend time with as you’ve gotten older, you’re not alone. A new study finds that Barbary macaques do this, too. In humans, this is usually attributed to the knowledge that they have limited time left in life. But it’s assumed that monkeys don’t know about their limited lifetimes. "With increasing age, the monkeys became more selective in their social interactions," said Laura Almeling of the German Primate Center. "They had fewer 'friends' and invested less in social interactions. Interestingly, however, they were still interested in what was going on in their social world." The study was published in the journal Current Biology. — Read it at Phys.org 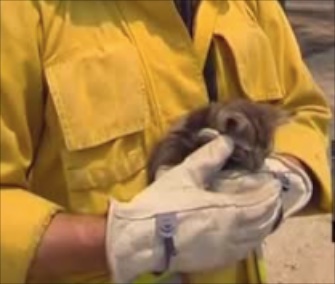 Kern Golden Empire
This little kitten was saved from the rubble of a deadly wildfire in central California.

There was a glimmer of hope in the midst of a devastating wildfire in central California over the weekend. A Kern County firefighter was doing a heat scan on a pile of rubble in Squirrel Valley on Saturday when he spotted a tiny kitten tucked into a corner of a collapsed roof. “I was surprised because the fire had burned through almost three days ago. So, it's been out here for quite a few days by itself,” said firefighter MiguelMartinez, who was bringing the kitten for help. The kitten was suffering from an injury to its eye but was otherwise doing well. The raging fire has burned more than 40,000 acres, including 200 structures, and has left at least two people dead, reported NBC News. The blaze was about 40 percent contained as of Sunday night. — Watch it at California’s Kern Golden Empire

When Reddit user northernbloke gets home each day, he gets an adorable welcome from his black Labrador Retriever, Gypsy. The sweet dog shows her love by delivering a large, heart-shaped pillow to him. A photo of her cute gesture has gone viral, and her owner, who resides in England, explained more about his dog’s welcoming ritual. “She tends to walk tight little circles around you, all the while her tail whizzes around at great speed. Then she rolls onto her back for her belly to be tickled,” he said. “I know she doesn’t know that the heart symbolizes love, but it’s still extremely cute,” northernbloke said. — See photo at the Huffington Post