May 19, 2016: We've scoured the Web to find the best and most compelling animal stories, videos and photos. And it's all right here. 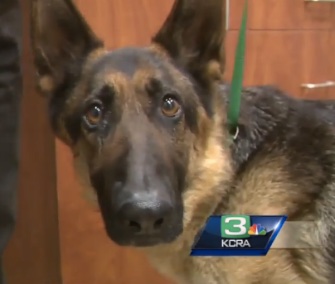 KCRA
Freeway Frida is recovering after spending five weeks on a highway median.

It was April 10 when police in Galt, California, first got a call about a German Shepherd who had fallen off the back of a pickup truck without her owners realizing it on Highway 99. The Galt Police went to search for her, but couldn’t find her. For the next five weeks, they continued to get calls about the dog, nicknamed Freeway Frida, every other day. Callers said they had spotted the dog, who had hurt her back leg in the fall, limping around the oleander-covered median. Still, she was nowhere to be found each time the police arrived. Finally, when they got a call early Saturday morning, Officer Silvia Coelho was determined to shut down the road and get Frida. The malnourished dog didn’t put up a fight. “She just laid down and looked at us with those big brown eyes and was like, ‘Oh thank you,' and like, 'Please help me,’” Coelho said. Coelho formed a special bond with the dog, who’s being treated at the VCA Bradshaw Animal Hospital. Officials are hoping to find Frida’s owners, but there might be another option for her, too. "You know, if no one comes for her, I just might have to adopt her," Coelho told ABC News. — Watch it at Sacramento’s KCRA

Fishermen reported a humpback whale entangled off the coast of Gloucester, Massachusetts, on Wednesday morning. A rescue crew from the Center for Coastal Studies worked for nine hours to free Foggy, a 29-year-old female who was disentangled off Nova Scotia in September 2013. They said the whale had a number of twisted ropes around the circumference of her body, and the ropes were snagged on fishing gear attached to the seafloor. With that anchor, she could only swim in a small circle but fortunately was able to get air. They were able to free her at 7:30 p.m., but had to leave one rope wrapped around her and “hope for the best.” “Every teammate worked their fingers to the bone for this whale,” said the center’s Scott Landry in a statement shared on Facebook. — Watch it at Boston’s WCVB

Caretakers for Ember, a 7-year-old Canada lynx at the Toronto Zoo, suspect she gave birth to two kittens on April 30. But the kittens are so tiny at birth that they couldn’t even confirm there were two of them until May 8. The kittens appear to be healthy and feeding well, but they will be monitored closely because the first 30 days are critical to their survival. — See photos from the Toronto Zoo via Facebook 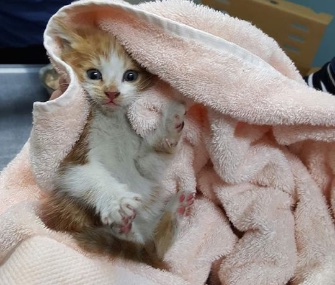 Melbourne Fire Brigade / Facebook
A five-week-old kitten was named Honda after she was found in a car engine.

A woman in Melbourne, Australia, had an extra passenger on board when she went to drive home from work Tuesday night. When she heard meowing coming from the engine, she went straight to a local animal hospital. The Melbourne Fire Brigade was called in to free the 5-week-old kitten from the behind the front grille. The crew believes the kitten was in the car’s engine block when the woman drove 15 miles to work in the morning and was stuck in there while she was at work for 12 hours. The firefighters worked for more than an hour to find and free the kitten, who was named Honda after the vehicle. They fed the kitten a big bowl of food before reuniting her with her mother and siblings. — Read it at Australia’s ABC

Rauour, a 3-year-old Labrador Retriever from Scotland, was rewarded by the veterinary charity PDSA this week for the vital role he played in finding a woman lost in blizzard conditions in February 2015. Humans had no luck finding the woman after a three-hour search, but Rauour discovered her unconscious and trapped in the hole of a tree root, with only her legs visible. The woman was then airlifted to a hospital for treatment. “Rauour’s detection skills really came to the fore that night,” said handler John Romanes. “His role as an air scenting search dog was more effective than a 20-strong team performing a line search on the ground. Without him finding the casualty when he did, the outcome could have been very grave indeed.” — Read it from the U.K.’s Telegraph