Feb. 10, 2017: We've scoured the Web to find the best and most compelling animal stories, videos and photos. And it's all right here. 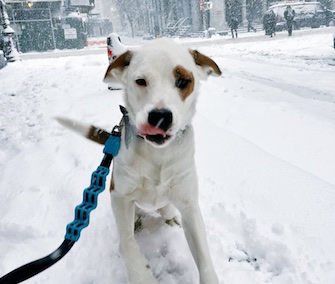 Twitter / NFLNatalie
Ollie had the streets of Manhattan to himself during the storm on Thursday.

Blizzard conditions hit the Northeast on Thursday, closing schools and business. The storm left more than a foot of snow — and resulted in a flurry of pictures and videos of delighted dogs on social media. Pet owners from many of the big cities impacted by the storm, including Boston and New York, shared pictures of their pups racing along the empty sidewalks or having fun in the park. There were some cats, too — although they didn’t look quite as happy. While schools will reopen in Philadelphia and New York today, they remain closed in Boston, where more snow is in the forecast. So, watch for more cute pics tagged #SnowDay! — See photos at People Pets

An Asian elephant born at the Oregon Zoo in April 1962 passed away on Thursday after a long battle with tuberculosis. Packy was one of the oldest elephants in captivity and the oldest male of his species in North America. Before Packy’s birth, an elephant hadn’t been born in captivity in the U.S. in 44 years. Saying they’d run out of options to treat Packy for his recurring TB, the zoo’s veterinarians said they made the decision to euthanize him. “A lot of people were involved in this decision, but that didn't make it any easier,” said Dr. Tim Storms, the zoo's lead veterinarian. “Anybody who's had a sick or elderly pet knows how painful this can be, even if you know it's the best thing for the animal.” — Read it at Oregon Live


Study: Young Penguins Getting “Trapped” Due to Changes

New research finds that young African penguins aren’t able to take all of the changes in their environment into account and wind up “trapped” in areas that can no longer support them. They aren’t finding their way to parts of the sea that would be better options. “Our results show that juvenile African penguins are stuck foraging for food in the wrong places,” says Richard Sherley of the University of Exeter and University of Cape Town. “When the young of this endangered species leave the colony for the first time, they travel long distances, searching the ocean for certain signs that should mean they have found an area with lots of plankton and plenty of the fish that feed on it. But rapid shifts caused by climate change and fishing mean these signs can now lead them to places where these fish, the penguins' main prey, are scarce with impacts on their survival — a so-called 'ecological trap.'” The findings were published in the journal Current Biology. — Read it at Science Daily 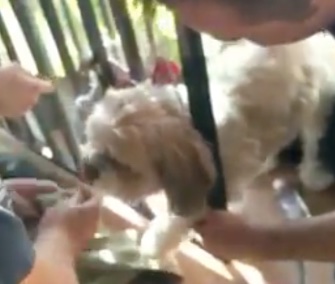 Pup Gets Head Stuck in Gate

Firefighters in Phoenix came to the rescue of a mischievous puppy who got his head wedged in between the metal bars of a security gate outside his elderly owner’s home. “With a little teamwork and ingenuity they were able to free Harley and reunite him with his grateful owner,” the Phoenix Fire Department wrote in a Facebook post with a video of the rescue on Tuesday. Cheers can be heard as Harley is gently pulled from the gate, and the relieved little dog had lots of tail wags for his rescuers. — Read it at UPI

Quincy has a job to do, and he’s thrilled to do it. Every morning for the last 11 years, the Golden Retriever has done his paper route in his Denver neighborhood. His owner trained him to deliver newspapers to the front steps of his neighbors’ homes, so they only need to open the door to reach down and get it. “It’s just nice to give to your neighbors,” said Quincy’s owner, Paul Golden. — Watch it at Today