Oct. 6, 2016: We've scoured the Web to find the best and most compelling animal stories, videos and photos. And it's all right here. 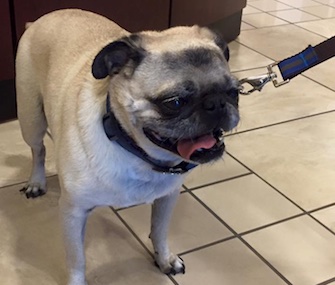 Meridian City / Facebook
Jaxson, 11, was honored by his hometown for alerting his family to a potentially deadly fire in their home.

Jaxson, an 11-year-old Pug, was honored by the city of Meridian, Idaho, on Tuesday night for saving his family from an electrical fire in their home. Jaxson is the first canine to receive the Hometown Hero Award for his “outstanding bravery.” The Pug is credited with stopping “a house fire from escalating and likely saved the lives in the home” on the night of August 29. “Jaxson began to persistently bark in what his owner describes as an ‘irregular tone and cadence,’” the city said. “Because of this, Jaxson’s owner rushed downstairs to figure out what was causing his dog to bark. That’s when owner, Todd Lavoie, noticed sparks from an outlet and its sole power strip.” Lavoie used a fire extinguisher and shut off the power before the fire could spread. Jaxson’s family says they’re “very thankful” for their little dog’s actions. — Read it at ABC News

It took many hands to rescue a 1,700-pound Clydesdale who got stuck in the mud while walking in water near his barn in Chester County, Pennsylvania, on Wednesday afternoon. Cyrus, who’s 18 years old, began to panic and got more stuck. It took hours to free him, with rescuers working by hand and then with the help of a big crane that was brought in. “He is a big heavy horse,” said Dr. Jill Acland. “He was in the mud. It cooled down his limbs. It caused some pressure on his body that can be very hard for him to stand up.” Crews were able to help Cyrus, and he’s doing well. He was taken to a veterinary hospital for further evaluation. — Read it at CBS Philadelphia


Study: Monkeys Remember When and Where Food Is Hidden

A new study found that capuchin monkeys had a well-developed, integrated memory. The primates were able to remember where food patches were hidden relative to their current location, the amount of food at the patches and even how long it had been since they’d last visited the patch. The ability to remember past events with context-specific details was previously thought to be specific to humans. The study was published in the journal Proceedings of the Royal Society B. — Read it at International Business Times 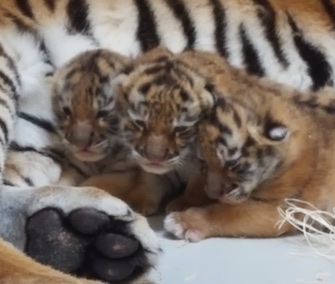 A trio of critically endangered Siberian tigers was born on Sept. 14 to mom Amba and dad Strannik at the Milwaukee County Zoo, the zoo announced on Wednesday. Keepers say the cubs are healthy and growing quickly. When they were weighed on Sunday, they were 5.6 pounds, 5.9 pounds and 6.9 pounds respectively. The baby tigers have been huddled in their den with their mom, nursing and bonding. There are only about 500 Siberian, also known as Amur, tigers left in the wild. — See photos at On Milwaukee

Back in April, former “Daily Show” host Jon Stewart and his animal activist wife, Tracey, stepped in to help a bull who escaped from a holding area for livestock in New York. The Stewarts brought the Angus bull to Farm Sanctuary in New Jersey, and named him Frank for Frank Lee Morris, a prisoner who escaped from Alcatraz. The comedian and his wife posed in a picture posted by The Daily Squeal Wednesday showing off Frank’s photo on the cover of Farm Sanctuary’s 2017 calendar, with the caption, “Our little boy’s all grown up!!!” — See photo at The Daily Squeal via Facebook