August 17, 2016: We've scoured the Web to find the best and most compelling animal stories, videos and photos. And it's all right here. 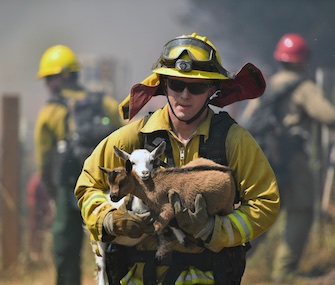 AP
A firefighter rescues goats as flames from a wildfire envelop the area in Lower Lake, California, Sunday.

The Henderson family had only about 10 minutes to flee their northern California home after they spotted smoke and ashes from a 4,000-acre wildfire rising from behind a neighbor’s house. They piled into the car with their three young girls and six of their goats, but had to leave about 10 goats behind because the scared animals were hiding and running away. “We got the pens open so the goats could at least run, and then we had to get in the car and drive away,” said Mary Henderson. Thankfully, there were heroes nearby who saw the goats. Firefighters and even a freelance photographer who was documenting the blaze, Noah Berger, jumped into action. They managed to carry the little goats out of harm’s way. The Hendersons later saw a news story about the goats’ rescue, and they’ve located about five of them. They’re asking for help with finding the others who were pulled from the fire. — Read it at SFGate.com

As much as your dog loves food, he might love praise from you even more. A new study that used brain imaging data and behavioral experiments found that of the 13 dogs who participated, most preferred praise from their owners over food, or they liked both praised and food equally. “Only two of the dogs were real chowhounds, showing a strong preference for the food,” said lead author Gregory Berns, a neuroscientist at Emory University. The study was published in the journal Social, Cognitive and Affective Neuroscience. — Read it at the Phys.org

The more, the merrier. New research finds that the bigger a bird flock becomes, the faster the birds in it will fly. “I was surprised that it is such an important factor. It has usually been neglected in studies of bird flight,” said study co-author Anders Hedenström. They theorize that large flocks tend to include larger-sized birds, who move faster than smaller birds. Their findings were published in the journal Philosophical Transactions of the Royal Society B. — Read it at Discovery News 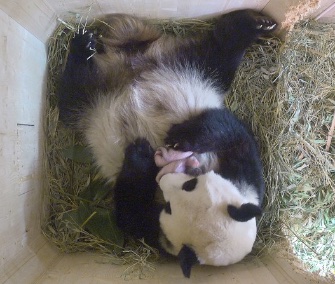 The Schönbrunn Zoo in Austria announced on Aug. 7 that its giant panda, Yang Yang, had given birth to a cub. But they started to wonder if she’d really had twins after hearing what sounded like the squeaks of not one but two tiny cubs coming from the nest box. Five days later, their suspicions were confirmed when they saw a second cub cuddling with Yang Yang on camera. The mom had conceived and given birth naturally, and the keepers hadn’t entered her den. Although pandas who give birth to twins in the wild tend to rear only the stronger of the two, both newborns appear to be doing very well so far, the zoo said. “Both pups have little fat bellies and mother panda Yang Yang is very relaxed,” zoologist Eveline Dungl said. “The little ones can be rarely seen on the pictures because Yang Yang warms them between her large paws most of the time.” — Read it at ABC News

The research team aboard the EV Nautilus captured a squid who looked like a little rubber toy at 2,950-foot depths off the coast of California. Even the scientists who watched it live clearly got a kick out of the appearance of the purple squid, and footage of it posted on YouTube has gone viral. The species, which is related to the cuttlefish, spends it life on the seafloor, and its eyes poke out to allow them to find prey like shrimp and small fish. The stubby squid is found in the Northern Pacific from Japan to Southern California. — Watch it at YouTube