Home ›
Our Pet Experts ›
Pet Scoop: Kristen Bell Celebrates Her Birthday With a Sloth, Will and Kate's Puppy

Pet Scoop: Kristen Bell Celebrates Her Birthday With a Sloth, Will and Kate's Puppy

February 1, 2012: We've scoured the Web to find the best and most compelling animal stories, videos and photos. And it's all right here. 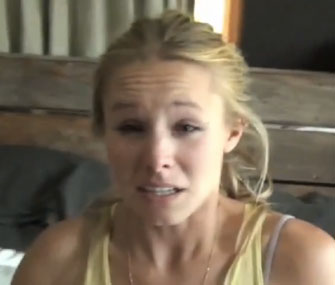 YouTube
Actress Kristen Bell reacts to hearing that there's a sloth in her house.

This is a woman who really likes sloths. While appearing on Ellen this week, Kristen Bell described her 31st birthday present from her fiancé, Dax Shepard — a sloth in her house.

When Shepard told her that he had a surprise for her, she somehow knew that there was a sloth in her home — and had a complete meltdown. “I immediately was overcome and I thought, 'There’s a sloth here . . . it’s gonna happen,' ” she told Ellen DeGeneres. “My entire life had been waiting for this moment.” She even shared a home video of herself freaking out to prove it. — Watch it on YouTube

Did Romney’s Dog Try to Escape in Canada?

Mitt Romney hasn’t been able to run away from the fact that he took a road trip to Canada in 1983, while his Irish Setter, Seamus, hung out in a cage strapped to the roof of the family’s car. Politicker NY now reports that two of Romney’s sons told reporters in an off-the-record conversation that Seamus ran away once the Romney clan got to Canada. — Read it at Politicker NY

Pythons Purge Some Mammals From the Everglades

New research has found that there's been a sharp decline in the number of raccoons, opossums and white-tailed deer inhabiting areas of the Everglades where Giant Burmese pythons have proliferated. — Read it at USA Today 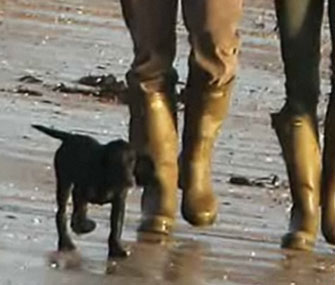 E! Online
The royal couple's new puppy joins them for a walk on the beach.

The Duke and Duchess Get a Dog

After weeks of rumors, a spokeswoman for the Duke and Duchess of Cambridge confirmed that the royal couple does indeed have a new bundle of joy: a male Cocker Spaniel. The puppy, whose name hasn't been revealed, came from a “family connection." — Read it at Today and watch it at E! Online

Scientists Analyze the Pace of Evolution

Researchers discovered that it would take 24 million generations for an animal the size of a mouse to evolve into one the size of an elephant. — Read it at Science Daily

There's no place like home, right, Toto? A Kansas state legislator introduced a bill that would make the Cairn Terrier, the same breed as Toto from The Wizard of Oz, the state’s top dog. — Read it at ABC News