June 27, 2012: We've scoured the Web to find the best and most compelling animal stories, videos and photos. And it's all right here. 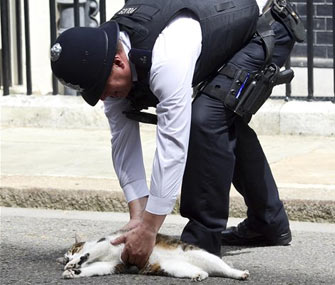 AP
A police officer had to move a napping Larry from in front of No. 10 Downing Street recently.

Prime Minister’s Cat Naps on the Job in Britain

Oh, Larry. He was hired to hunt down mice at No. 10 Downing Street, where the nation’s prime minister resides, but Larry has faced repeat criticism for sleeping on the job. Now, the adopted feline has been caught taking a catnap — on Downing Street itself! When cabinet ministers began arriving for a meeting, a police officer had to interrupt Larry's slumber and move him to a safer spot. — Read it and see more photos at People Pets

Plague Afflicting Bats Is Spreading Across the Country

White-nose syndrome, the fungal infection that attacks bats while they’re hibernating, has wiped out millions of the mammals in the Northeast and Canada — and it shows no signs of slowing. The mass deaths could lead to an estimated $3.7 billion loss for farmers, who rely on the bats to eat crop-destroying insects and pollinate their plants. Biologists conducting winter cave surveys have found that the syndrome has now spread as far west as Iowa and south to Alabama. — Read it at USA Today

Veterinarians at Tufts University have produced two surveys that will help veterinarians and owners make decisions about health care needs for pets with cardiac disease: FETCH (Functional Evaluation of Cardiac Health) and CATCH (Cats’ Assessment Tool for Cardiac Health). The surveys ask owners to rank aspects of a pet’s health and quality of life on a scale of 0 to 5. Vets are then able to use the results to make more informed decisions about an animal’s needs, including nutrition and treatments. — Read it at DVM 360 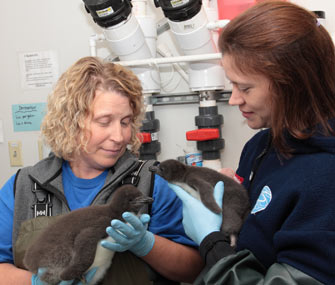 According to Zooborns, bird keepers at the Tennessee Aquarium have been caring for two “portly” Macaroni Penguin chicks, who were introduced to each other for the first time recently. “These baby penguins are absolutely adorable with fuzzy flippers, oversized feet and pudgy little bellies,” said senior aviculturist Amy Graves. — Watch it at YouTube

Panda Baby Meets the Chinese Public For the First Time

A panda cub looked quite pleased to be in the public spotlight at the Giant Panda Research Base in China. The cub could be loaned to a foreign zoo as a diplomatic gift in the future. — See the photo at People Pets