Jan. 27, 2014: We've scoured the Web to find the best and most compelling animal stories, videos and photos. And it's all right here. 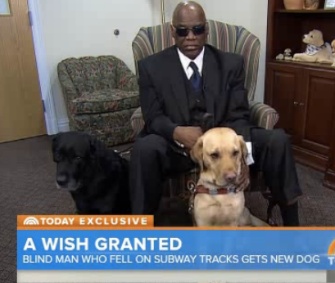 Last month, a blind man named Cecil Williams survived a fall into the subway tracks in Manhattan thanks to his seeing-eye dog, Orlando. When Williams fainted, the 11-year-old black Lab tried to break his owner’s fall, then jumped into the tracks and laid over him to protect him as a train passed over them. In the days after the incident, Williams revealed that he would have to give Orlando up when he retired because he couldn’t afford to keep him without the help of insurance. But donations poured in to help. Thanks to anonymous donors, Williams now has two dogs. His new guide dog, Godiva, graduated from training over the weekend and is ready to start taking over the workday for her new pal, Orlando. And Orlando can kick back and relax with his grateful owner. “Orlando is like my angel,” said an emotional Williams. “We work together. I protect him, and he protects me … The spirit of goodwill, it exists. In the world, you see a lot of negative things, but I try to focus on the positive.” — Watch it at Today

Scientists have announced a proposed new species of river dolphin, or boto, that was found in the Araguaia River Basin in central Brazil. River dolphins are among the rarest in the world, and the researchers say that this new species — the first to be discovered in a century — is highly endangered. The new botos were isolated in the adjacent Amazon Basin by rapids and a small canal. In the study,published in the journalPLOS ONE,scientists suggest calling it the Araguaian boto. This would be the fourth species of river dolphin.— Read it at National Geographic

At just 6 weeks old, a male lion cub at Zoo Miami has battled several health challenges. The baby boy was born to first-time mom Asha on Dec. 15, and has already survived dehydration and a bacterial infection. Now his keepers, who suspect that his mom may not be producing enough milk for him, are supplementing with three bottle feedings a day. He gets his bottles through a barrier so that he can remain with his attentive mom, and luckily Asha has accepted him after each feeding. Zoo officials say the cub is in stable condition, but they’re guarded about his chances for survival. — Read it at Zooborns 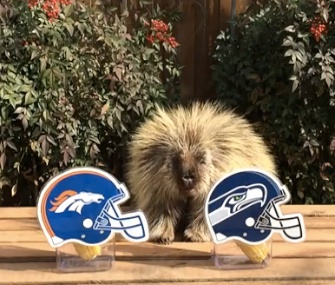 For the last two years, our favorite talking porcupine, Zooniversity’s Teddy Bear, has accurately predicted the winner of the Super Bowl. The squeaky little guy is at it again. As far as he’s concerned, for this year, the corn stashed behind the Seattle Seahawks logo is the clear winner over the Denver Broncos. In the YouTube posting, his handler warns those who have might take this too seriously that Teddy’s prediction is just for fun. “Teddy Bear is just a simple porcupine that likes corn. He doesn't even know what a football is.” But he has a good track record, so we’ll see on Sunday whether the porcupine gets it right for a third year in a row! — Watch it at YouTube

Two years ago, when Hurricane Irene blew through New Jersey, Jeana Hoffman’s beloved tuxedo cat, Sid, disappeared. When he never turned up, she assumed the worst — until Wednesday night, when she saw him on Facebook. It turns out that the kitty was found about a mile from home after the storm, and Linda Rosenson Coe had taken him in. She tried, without luck, to find his owner. Coe and her husband named the black-and-white cat Ansel Catems (a play on Ansel Adams) and recently adopted another cat from the Animal Welfare Association. Both cats were in a picture that the group posted on Facebook, which Hoffman happened to see. She knew right away that the second cat in the photo was her Sid. But while Hoffman was thrilled to visit Sid on Sunday and see that he was alive and well, she decided to let him stay with his new family. "It was really the right thing to do," Hoffman said. "Taking him away would have confused him, and it would have been hard for their family, and they are great people." The Coes were grateful for the chance to keep Ansel Catems, and Hoffman says she may visit him from time to time. — Read it at Philly.com