April 7, 2017: We've scoured the Web to find the best and most compelling animal stories, videos and photos. And it's all right here. 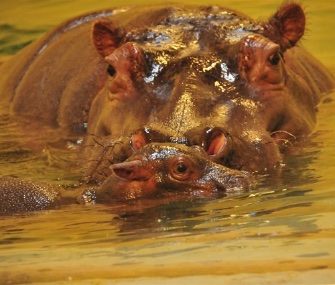 Memphis Zoo
The public is being asked to vote on a name for the Memphis Zoo's baby hippo.

A female Nile hippopotamus was born to mom Binti at the Memphis Zoo on March 23. Today, the calf makes her debut with her mom by her side. “Binti is an extremely attentive mother, and is very protective of her calf,” said the zoo’s Farshid Mehrdadfar. “The little lady follows her mom around everywhere, and you can typically find her asleep on Binti’s nose or back.” The zoo is asking the public to help decide on her name. The choices include Venus, Cleo, Winnie, Zuri and Asha, and you can vote on the zoo’s web site through April 13. Her name will be revealed on April 14. — Read it at ABC News

Three days after her owner died in a boating accident, firefighters found Yoda, a yellow Labrador Retriever, stranded near a Marin County, California, beach. Yoda’s owner, Brian Phidat Ho, 47, died on Monday when his boat capsized in choppy waters. The shivering dog was discovered by firefighters who were in the area to train for water rescues on Thursday. They fed her and warmed her up by the fireplace at their fire station before reuniting her with her late owner’s family. — Read it at SF Gate

A 16-year-old cat named Jimmy is back home with his New Jersey family two years after he disappeared. The family was devastated when they couldn’t find Jimmy in September 2014. Then, two weeks ago, a friend spotted photos that looked familiar on the Lost West Milford Pets Facebook page and forwarded them to Susan Zelitsky. Someone had turned Jimmy in to a local animal shelter after finding him on the streets after a recent blizzard, 10 miles from his original home. “I said, ‘Jim, is that you?’ And he came over and gave me a head butt and rubbed. He’s a special cat,” Zelitsky said. Jimmy has settled right back in at home, even picking up old habits. — Read it at Seattle’s Q13 Fox 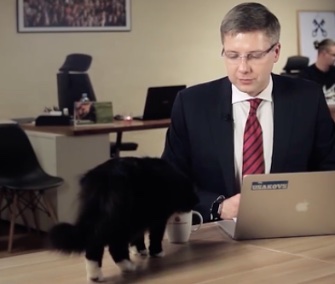 Australia’s 9News
A Latvian mayor's cat interrupted his interview to try his tea.

A brazen cat didn’t seem to care that his owner, the mayor of Latvia’s capital, was in the middle of a live interview when he decided to hop up on his desk and check out what was in his mug. Nils Ushakov stared the black cat down as he approached and took a sip of his tea. But then the mayor just laughed, glanced at the camera and guided the cat off his desk before returning to the interview. — Watch it at Australia’s 9News

A trio of male red pandas were born on Christmas Eve at Australia’s Symbio Wildlife Park, but the zoo kept their arrival under wraps until this week, when they finally shared their cuteness with the rest of us. It looks like first-time mom Kesari has taken great care of the adorable endangered cubs with the assistance of keepers who helped feed the babies. The boys are now venturing out of their nest box to explore their surroundings. Red pandas are facing a rapid decline in numbers due to habitat loss in Burma and China. — Read it at the Huffington Post