Feb. 9, 2017: We've scoured the Web to find the best and most compelling animal stories, videos and photos. And it's all right here. 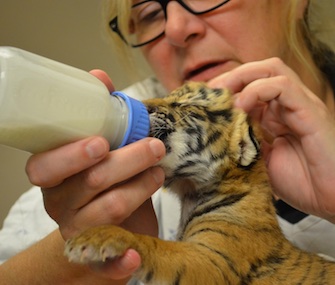 Much of the attention at the Cincinnati Zoo recently has been on its prematurely born hippo, Fiona. But the zoo had another exciting arrival last week. A trio of rare Malayan tiger cubs was born Friday to 3-year-old mom Cinta. Unfortunately, the first-time mom’s maternal instincts didn’t kick in quickly enough, and veterinarians concerned about the cubs’ dropping body temperatures without mom’s warmth decided to remove them from their den. “Nursery staff is keeping them warm and feeding them every three hours,” said Mike Dulaney, curator of mammals. Malayan tigers are critically endangered, with only about 500 left in the wild. — Read it at the Cincinnati Zoo

Rescue workers in California came to the aid of a 13-year-old horse who wandered away from his stable during a cleaning, slipped down a steep hill and found himself stuck upside-down in a creek bed on Tuesday. “He was kind of belly-up and in a tough position,” said Capt. Marty Driscoll of the Orange County Fire Authority. Animal control sedated Honor while firefighters used chainsaws to clear the brush that was trapping him in place, and he was eventually able to get up and walk away on his own. He was reunited with his owner. — Read it at UPI

A delighted puppy was adopted last week by the Sacramento firefighter who found her sick and tied to a fence in the rain in October. Mike Thawley and his crew brought Chunk to the Front Street Animal Shelter for help. She’d lost almost all her fur to mange, and it took several months of treatment for her to become healthy again. But despite her ordeal, she was always happy to see her firefighter hero when he stopped by to visit her. Once she was ready, Thawley brought Chunk home to foster her, and the rest of his family fell in love with her, too. Now, she’s officially a member of the Thawley family — and a sweet video from the day she was adopted shows how excited she is about that. — Read it at Sacramento’s ABC 10 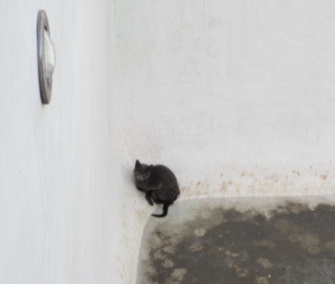 Instagram / azhumane
A stray cat who fell into an old pool in Arizona was rescued and named Scuba.

Scuba earned her name the hard way. The friendly cat was found at the bottom of an old, empty swimming pool behind a sports department store in Arizona last week, huddled in a corner and trying to avoid the foot of water at the bottom. “It was clear that she had been down there for some time and she was curled up in the corner, soaking wet, shaking and hungry,” said Andy Gallo, an Arizona Humane Society emergency animal medical technician who said he could hear her heartbreaking cries from the gate. “Despite her situation, she is the sweetest girl and will make someone a very loving pet.” After recovering at a local animal hospital, Scuba will be up for adoption today. — Read it at People Pets

Australian actress Margot Robbie has revealed a new addition to her family — an adorable rescue puppy. The newlywed has been shooting the Tonya Harding biopic “I, Tonya” in Atlanta. On Wednesday, she shared a photo on Instagram of little Boo Radley, named for a character in To Kill a Mockingbird, looking tiny while sitting on a beanbag. — See photo at ET Online