Pet Scoop: The Obamas Get a New Puppy, Lupo the Dog Appears in Royal Family Photo

August 20, 2013: We've scoured the Web to find the best and most compelling animal stories, videos and photos. And it's all right here. 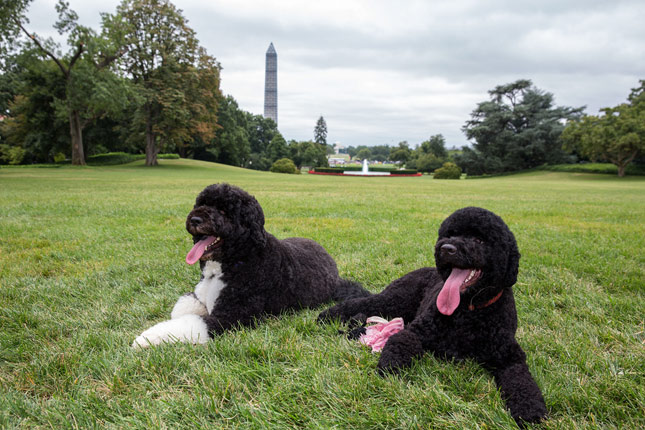 The pitter-patter of puppy feet can be heard in the halls of the White House once again. Meet Sunny, a 1-year-old Portuguese Water Dog, who’s the newest addition to the first family. She’s “full of energy and very affectionate,” and the Obamas chose her name because it fit her cheerful personality, according to the White House. Last year, Michelle Obama said she was arranging a doggie play date for 4-year-old Bo because he “doesn't have enough dog interaction.” From the looks of a cute video of the two dogs romping around on the lawn of 1600 Pennsylvania Avenue, he’s getting plenty of that now! The president and first lady each took to Twitter to announce their exciting news. “So excited to introduce the newest member of the Obama family — our puppy, Sunny!” wrote Michelle Obama, as she shared the photo above. Sunny was born in Michigan in June 2012. In honor of their new pup, the family is making a donation to the Washington Humane Society. — Read it at the White House and learn more about presidential pets 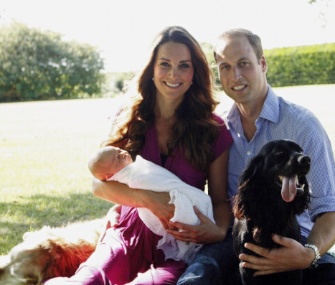 Michael Middleton / Getty Images
The Duchess of Cambridge and Prince William are pictured with their baby boy, Prince George, and dogs Tilly, left, and Lupo, right.

On the other side of the pond, another famous family made headlines with the release of their first family photo. A picture taken by Kate Middleton’s father in the Middletons’ Bucklebury garden features the newborn Prince George with the Duchess of Cambridge and Prince William, along with two canines — the couple’s Cocker Spaniel, Lupo, and the Middleton family Retriever, Tilly. In his first official interview since his son’s birth, Prince William told CNN that Lupo is “coping all right, actually,” with the baby’s arrival. "As a lot of people know who have got dogs and bringing a newborn back, they take a little bit of time to adapt, but he's been all right so far. He's been slobbering around the house a bit, so he's perfectly happy," William said.— Read it at CNN

Speaking of babies, a new study suggests that baby owls have a sleep pattern that’s analogous to that of human babies. Research finds that both spend a similar amount of time in an awake-like phase called REM (rapid eye movement). The amount of time that both humans and owls spend in REM sleep decreases with age. While adults are thought to dream during REM sleep, this phase is thought to play an important role in brain and language development in human babies. The study was published in the journal Frontiers in Zoology.— Read it at Live Science

More than 200 dead or dying bottlenose dolphins have washed up on the shores of the mid-Atlantic in July and August. The animals are suffering from a mysterious plague that’s baffling and concerning to scientists. The deaths have been formally classified as an “Unusual Mortality Event” by the National Oceanic and Atmospheric Administration. "We started getting really alarmed by July 25, when we started getting more than one animal per day. That was the tipping point," said Susan Barco, a researcher at the Virginia Aquarium Marine Mammal Center. Experts are concerned that the deaths are a sign of an ailing coastal ecosystem, and fear that many more dolphins may die before the culprit is determined. — Read it at NBC News

There’s much happier news for a juvenile killer whale who was stranded for weeks in Weeteeam Bay in British Columbia, Canada. Scientists from the Vancouver Aquarium and the Department of Fisheries and Oceans found Sam in the remote bay, and hoped that if they just kept an eye on him, he would leave through the same narrow and shallow entrance where he entered the bay. After several weeks, they tried to coax him out using recorded calls from other killer whales, but he was too scared to swim toward them though the entrance. Last week, growing concerned about Sam’s health, the scientists again played the recordings while using a floating towline to help Sam through the entrance, and it worked. Sam popped out “like a cork” and swam out to sea, said the Vancouver Aquarium’s Lance Barrett-Lennard. — Read it at Paw Nation