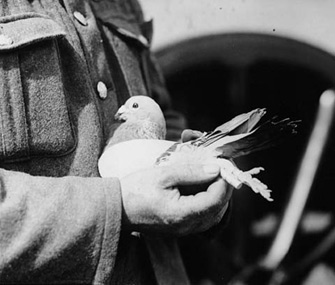 For centuries, the fastest way to send a message over a long distance was by homing pigeon. These birds carried news of a new pharaoh to all corners of ancient Egypt and relayed the results of the Olympics to the ancient Greeks. They were even one of the earliest forms of military communication, used during wars in the days of Julius Caesar and Hannibal.

Nowadays, pigeons still get to show off their skills in the sport of racing. Released in unfamiliar locations, they can find their way home from hundreds of miles away, flying at speeds up to 60 miles an hour. But they've long been replaced by advanced technology to communicate long distance, so you might be surprised to learn that they were still used by the military as late as the Second World War.

Unlike radio, messages sent by pigeon couldn't be overheard by enemy spies, and the birds often came through when technology didn't. One such hero was a bird called G.I. Joe, who saved the day for British troops when they occupied Colvi Vecchia, Italy, during World War II. The Germans had retreated unexpectedly, so the British moved in and tried to cancel the planned U.S. bombing of the city. But all their attempts to communicate failed —except for G.I. Joe, who arrived back at the air base just as the bombers were preparing to take off.

Although pigeons are born with the instinct to return to their home loft, making them effective messengers in wartime took special training. Most of the men who did this training have passed on, but filmmaker Alessandro Croseri captured the memories of some of them for a series of documentaries called The Pigeoneers.

For his first film, Croseri interviewed Col. Clifford A. Poutre, chief pigeoneer of the U.S. Army Signal Corps, before his death at the age of 103. Croseri says that Poutre "changed the whole attitude about how they were training the birds." During World War I, trainers thought the pigeons needed to be starved to make sure they'd return. In contrast, said Croseri, Poutre believed "it's all about kindness and love."

With this positive approach, the pigeons were trained to perform remarkable feats, sometimes at odds with their natural tendencies. One was flying at night. "The German snipers were looking for the birds — they would shoot them down," says Croseri. Night flying made it harder for snipers, but for a daytime bird like the pigeon, it's quite unnatural. The pigeoneers made it possible by training the birds to a route during the day and then patiently retraining the same route at night.

Pigeons were also trained to fly over open water — a natural skill for a gull or an albatross, but something a pigeon would never do on its own. This skill allowed pigeons to be carried on planes and used to communicate the location of a downed crew when other means of communication were destroyed.

Perhaps most amazing is that some pigeons were trained to return to new places so they could be used in different locations. Normally, the loft a pigeon is trained to when it's young is where it will return for the rest of its life."The terminology in pigeon lingo is we say you 'make him stick,' which means you're training him to a new location and they're not going back to the old location," says Croseri, "which is usually a very difficult thing to do because their homing instinct is to go back to the place they were trained originally."But at least some birds learned to do this, including the famous G.I. Joe, who delivered messages for the troops in several places including Tunisia and Italy.

Some pigeons were also trained to mobile lofts that could be moved along with the changing location of the front lines. "They would move the loft...in a straight line every day for a mile, up to 25 miles," says Croseri. "They told me the birds were extraordinary. They were sticking to the lofts immediately."

When the pigeon service was discontinued in 1957, 15 pigeons designated as heroes were donated to zoos to live out their lives, and the rest were sold to the public. People reportedly came from all over the country to the pigeon service's home at Fort Monmouth, N.J., and waited for hours for the chance to buy one. Purchasers were reminded of the difficulty of retraining a pigeon to a new home, and told that if their pigeons returned to Fort Monmouth, they'd have to pay for the return shipping — just one last tribute to what the pigeoneers achieved.