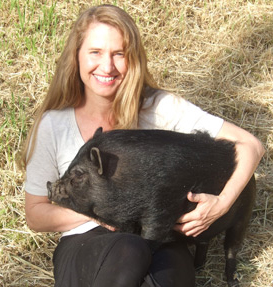 Move over, Babe. There's a new breed of pig in town. While certain little piggies may go to market, others spend their free time working as assisted-therapy animals in schools and nursing homes.

And, in some cases, they’re even better than the proverbial dog at providing therapeutic benefits.

Why Not Just Get a Therapy Dog?

Lois Brady, a speech language pathologist based in Martinez, Calif., works with patients between the ages of 6 and 22 who have autism or other special needs. When she decided to seek out a therapy animal, a canine was the first thing that came to her mind.

"I filed through all of them in my head,” Brady says. “A dog was the most natural choice, but many kids on the autism spectrum have had bad experiences with dogs in the past.” If they see a canine, she explains, they may cover their ears or even run from the room.

Something like a bunny, on the other hand, was too fragile. “Students have a hard time ‘grading their muscles’ or knowing how hard they’re grabbing the animals,” she says.

Her therapy animal had to not only be a good fit with the kids, but it had to be portable. Enter Buttercup, a 3-year-old, miniature potbellied pig who visits schools with her.

Brady can cite a few reasons why her porcine pet has been the perfect panacea in the classroom. “Students love him because they have no preconceived notion of what a pig should be,” she says. “He’s so visually curious to them that they’re immediately drawn to Buttercup. Kids who can't remember how to spell their own name remember everything about him, from where he sleeps to how many siblings he has."

Better yet: Buttercup is preternaturally calm. “Many of our students have aggressive behaviors,” she says. “A pig can definitely take a blow — and not turn around and want to attack.”

Lois and Buttercup, who volunteer through PetPartners — a nonprofit that brings therapy, service and companion animals to people in need — had to get certified before Buttercup could be, in a word, unleashed

The duo took a two-week assisted therapy course before setting up an appointment for Buttercup’s formal, two-hour evaluation. Volunteers pushed him and pulled his tail, but Buttercup remained singularly focused on the prize: a carrot. He passed with flying colors.

Of course, not all potbellies are born for therapy work. “It takes a special pig,” says Priscilla Merta, the owner of a 10-year-old, 110-pound potbelly named Sherman who volunteers with her at nursing homes throughout New Jersey. “Some pets can handle a more stressful environment, and some can’t. They have to get used to the wheelchairs, the action."

According to Merta, the minute they arrive at the nursing home, Sherman wants to get going. “The residents just love him," she says. "They’ll say, ‘Come back, come back.’ ” Merta especially loved the day that a blind man got to pet Sherman.

And this pig aims to please — Sherman does a variety of tricks, from doing “figure-eights” around Merta’s legs to picking up a basket with his nose. A born ham, he also loves the limelight. “If you have a camera, he’s right up there,” she says. “He just shines.”