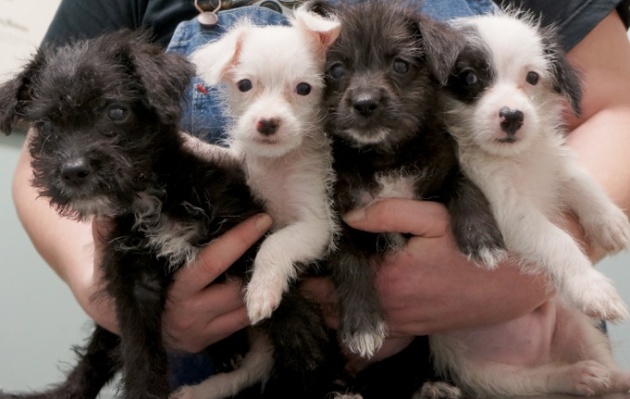 Bill Foundation
Logan, Luke, Raven and Elliott were rescued by Annie Hart and Samantha Haas in a dramatic bus chase.

It was a scene right out of a Bruce Willis movie — and an improvised one, at that.

Annie Hart, executive director of Los Angeles animal rescue group the Bill Foundation, was getting ready for bed when she received a call saying that a group of puppies needed her help.

Samantha Haas, who runs WagsAware, an organization that raises money for rescues, had seen a homeless man put four young puppies into a Tupperware bin and close the lid, leaving them with little air to breathe. Then, he boarded a bus.

Knowing there was little time to spare, superhero Hart “just kicked into action.” Within minutes, Hart was in the car with her husband, James, and their dog Arnold, racing to catch the bus and getting updates from Haas on its whereabouts.

Thinking quickly, she told Haas to drive slowly in front of the bus to stall it. "I had no idea this was something I’d ever have to do... I think I’ve seen too many action movies,” Hart laughed. But it worked. Hart could soon hear the annoyed bus driver honking his horn, and her husband got behind the bus.

“At one point my husband looked at me and said, 'You’re not getting on that bus are you?’” Hart said. 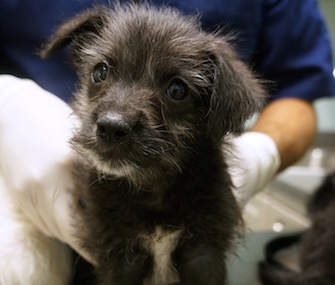 Bill Foundation
Raven, the only female in the group, is "very much the girlie girl," Hart said.

In an account of the ordeal that she wrote on Dogster, Hart describes how when the bus came to a stop, she jumped out of the car and ran screaming to the closing doors.

“Like a lunatic I am jumping up and down, calling for the driver to open the doors,” she wrote. “Like a completely sane person, he drives away.I jump back in the car and we take off after it.”

At the next stop, Hart tried again, this time yelling to the driver that a man had puppies in Tupperware on the bus. The driver said, “There’s puppies on the bus?” and let Hart on board.

But she didn’t go running to the man and the puppies. She calmly paid the fare and texted Haas to get a description of the man as she tried to find him on the crowded bus.