Home ›
Our Pet Experts ›
Puppy Training: How to Get Your Dog Comfortable With Being Handled

Puppy Training: How to Get Your Dog Comfortable With Being Handled 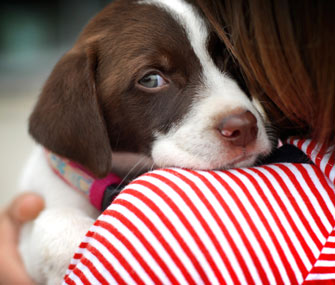 Half the fun of having a puppy is touching, holding and cuddling with him, and these are all good things for puppy development — as long as they're done right. This means doing things gently, so your puppy feels safe whatever you're doing with him. He should know from a young age that human hands are givers of food, toys, treats, petting and security.

The breeder should have started early by handling the puppies even just a few minutes each day. Studies have shown that puppies who are handled from birth grow up to handle stress better as adults. As soon as you get your puppy, you want to start getting him used to being lifted and held, and to having various parts of his body touched by you.

Choose a time when he's calm; otherwise handling exercises will quickly deteriorate into play fighting and wrestling exercises. Hold him on your lap and let him calm down there. Then touch his feet, spreading each foot briefly to look between the toes. Praise him calmly for being good. If he protests, you may have to start more slowly, when he's sleepier or by just touching each foot. Touch his ears, and look inside each ear. Lift his lips, then open his mouth. Rub your fingers along his gums. Lift his tail. Use a soft brush to gently go over his body. These exercises are important for when you need to trim his nails, examine his feet, examine his ears, administer ear drops, examine his mouth, brush his teeth, give pills, take his temperature or groom him. Repeat this every day, sometimes giving treats for especially cooperative behavior.

Start with very short sessions where you don't go over him as thoroughly as you eventually will. You want him to succeed, not to learn that if he struggles and squirms enough he can get away. Let him learn that if he's calm he'll get treats and praise. Gradually increase the time of each session and the thoroughness of the handling. Having other family members and friends participate can be helpful. Remember, you'll also want your puppy to cooperate for the veterinarian or groomer.

If he objects to being handled, try to find some sort of handling he enjoys, such as being stroked on the head or under the chin, and intersperse it with his less favored exercises. For example, stroke his head three times, lift his ear, give a treat, stroke his head five times, touch his lip, and so on, giving a treat now and then for good behavior.

Your ultimate goal is to progress to procedures you'll need to do to him as an adult. For example, to trim his nails you'll go from touching his feet to also spreading his toes, then touching each toe nail, then touching the nails with a clipper, then cutting off a tiny nail tip. Give a treat after each nail and you'll have a dog wishing he had more toes.

Puppies can be possessive about their food, especially if they've come from a competitive litter. But this is not acceptable behavior for your puppy to exhibit now that he's in your home, and especially not toward humans.