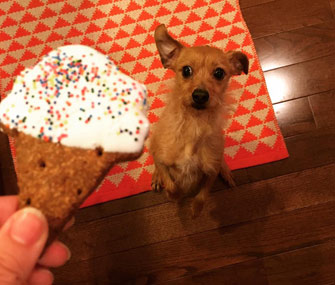 Mel Seeger via Facebook
Lilly indulged herself on some candy hearts and chocolate on Valentine's Day. She didn't feel too great afterward.

It’s a good thing dogs are so cute and lovable — a lot of them seem to have a knack for getting into trouble when their humans are away! We asked our Facebook fans to tell us the worst things their dogs have ever done while they were home alone, and, wow, their stories of champion chewers and skilled food stealers are something else.

Just remember that while we can laugh at these anecdotes now, it's important to note that chewing household items and eating dangerous human foods can cause serious problems for your pet and should not be taken lightly. If your dog has ingested a dangerous food or item, or if you suspect that he has, you should contact your veterinarian immediately.

Christmas and Valentine’s Day seem to be popular days for dogs to wreak havoc on their homes and diets (they tend to be filled with food that dogs shouldn't eat):

“Lilly will do anything to get to something that might be food or trash. I think the worse thing that she ever got into was a bag of Valentine's Day candies. It was mostly candy hearts, but there was some chocolate in there, and she ended up throwing up chocolaty puke all day.” — Melanie Seeger

“Cleo locked me out of my apartment on Valentine's Day by chewing the door knob and breaking it when it was in the locked position.” — Julie Yannuzzi

“One Christmas night, we came home to find a few chewed-up cars from the train set around the tree, and my Collie's stocking on the floor with all her treats gone. We knew our Bulldog, Babe, was the guilty party, because Gretel, the Collie, was kept in another room and our other Bulldog was much too small to reach the stocking. Babe had guilt written all over her as she smiled and wagged her little stump around. Her punishment was she had to give all her Christmas treats to Gretel.” — Lorraine Ricci Jenson


What Won’t a Dog Chew or Destroy?

We’re not surprised when dogs nibble on shoes or dirty clothes left on the floor. But these dogs take chewing to a whole other level.

“[The] first time we left our pups at home alone, they shredded a couch cushion in just an hour or so (one we were replacing anyway). The living room looked like a blizzard hit, and they both had foam rubber stuck to their whiskers and mouths. But they were so happy to see us come home!” — Charles Coffelt

“Where do I start? Our Boxers have... eaten a hole in the wall (flat part of a plaster wall!), eaten a couch, opened the oven and eaten a pan of stuffed cabbage, opened the fridge and eaten a package of steaks, eaten a mattress, torn up a bag of flour, eaten corners of kitchen cabinets, plus tons of other stuff! At least it wasn't all in the same day!” — Kris Schmidt Lapushansky

"My black Lab chewed the arm off a couch. We bought the couch three months before this incident." — William Martinez


Sometimes Crate Training Doesn’t Work as It Should

We are huge proponents of crate training, but sometimes determined dogs still find a way to get into trouble when they’re safely secured in their crates. This before-and-after photo that Jen Baker shared says it all: 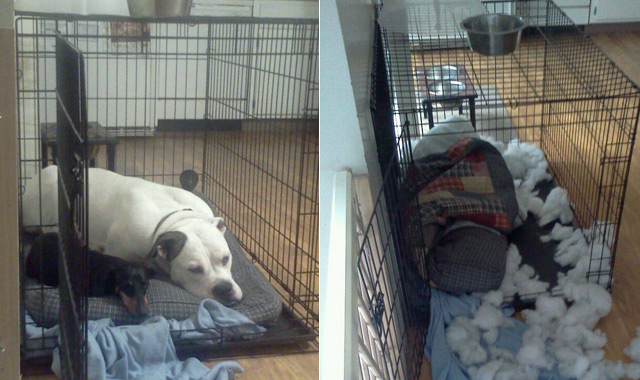 Jen Baker via Facebook
Before (left) and after (right).