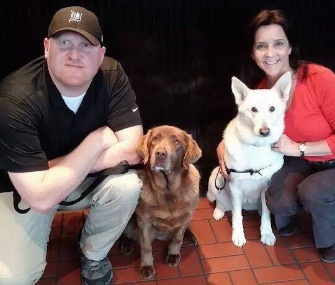 Kristen Maurer knows what makes a tough veteran melt: bringing his best buddy back to him.

This year alone, Maurer, president and co-founder of the nonprofit Mission K9 Rescue, has reunited about 20 retired military and contract working dogs with their former partners.

Marines and soldiers often call Maurer once they finally have the approvals required from the military to adopt their dogs, but they don’t know how to get the dogs home from where they’ve been retired, which could be overseas.

“They have this desperation, they have this fear — you can just hear it in their voices. I can’t even describe it, but I hear it every single time,” Maurer says. “I say, ‘We will take care of every single part of it.’ I hear some relief, but they think it’s too good to believe.”

Maurer and her co-founders, Bob Bryant and Louisa Kastner, use donations to their group to facilitate the transportation home. That could take 10 days to three months, depending on where a dog is located.

“When I go get the dog and I hand the leash over, they all of a sudden go from this tough Marine to this marshmallow,” Maurer says. “All of a sudden, it’s just like a little boy and his dog.”

If a military dog is retired overseas in a non-combat zone, the dog is not part of the military any more and cannot legally be put on military transport, Maurer explains.

“If the handler can’t afford to get the dog back, [the dog is put] up for adoption overseas,” Maurer says. “So these guys who’ve given their all to their country, who’ve gotten [approval to adopt] their dogs — they're theirs for the taking — cannot afford to get their dogs back home.”

The American Humane Association has helped sponsor some of the reunions and appeared on Capitol Hill with Mission K9 last summer to push for a change to the law so that military dogs would be retired in the United States instead of overseas, allowing them a less expensive ride home via military transport.

“Military and contract working dogs — these are tough, tough jobs,” says American Humane president and CEO Robin Ganzert. “These dogs work incredibly hard. … These soldiers have served in unimaginable circumstances, and they’re looking for their dogs back.”

Six teams of retired dogs and the service members whom Mission K9 and American Humane helped reunite will join Ganzert and others on the AHA's float in the Veterans Day parade today in New York.

Maurer has witnessed many of those reunions and says they’ve all been special and important in some way. Some really stand out in her mind, like the one between Army Sgt. Jason Bos and Cila, a 6-year-old chocolate Labrador Retriever.

“Cila came from Germany. That was the most emotional one, because that dog went bananas when she heard her daddy,” Maurer says.

Bos served with Cila, whom he calls Cici, for four and a half years. They trained at Lackland Air Force Base in San Antonio, where many military working dogs are trained.

The partners worked stateside, where they did a lot of missions with the Secret Service to prepare sites for presidential appearances, including at the 2012 Democratic National Convention in Charlotte, North Carolina. They then left for a 12-month deployment to Iraq, where Cila sniffed out explosives. But their tenure together was cut short when Bos injured his back while in the United States training for another deployment. That forced him to retire early, in December 2012.

“She was too young, and [the military] wouldn’t let me adopt her out, which I understood but I wasn’t happy about,” Bos says. “I figured I never would see her again. … It was tragic when I left her. I knew what was happening, but she had no idea what was going on.”

Bos was heartbroken and kept track of whom Cila’s handler was and where she was deployed. Earlier this year, the new handler contacted Bos to tell him Cila was being retired, and Bos jumped at the chance to bring her home.