Home ›
Our Pet Experts ›
Linda Lombardi ›
Save the Bees! How You Can Help Protect Our Native Bumblebees From Extinction

Save the Bees! How You Can Help Protect Our Native Bumblebees From Extinction 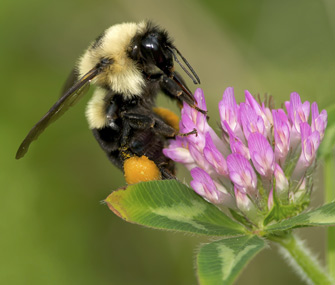 These days, you hear a lot about the plight of honeybees and how crucial they are to the food we eat. What you don't often hear is that honeybees are actually latecomers to this continent — they were introduced by European settlers. And flowers and fruits got along fine before they arrived, because there were native bees.

"We have around 4,000 species of native bees in North America," says Rich Hatfield, conservation biologist with The Xerces Society for Invertebrate Conservation. "They've been maintaining the flora diversity of North America for thousands to millions of years, and they're essential to continuing that."

That important role makes it worrisome that native bees are also declining in numbers. You can help scientists studying the problem by participating in a project to look for the cutest, fuzziest bee around — Bumble Bee Watch.

Native bees don't often get our attention, partly because they lead less conspicuous lives than honeybees. Many native bees are solitary, and while the 47 or so species of bumblebee do live in colonies with a queen, their nests are usually hidden underground. The colonies are also much smaller: only 25 to 50 bees per colony in some species, up to maybe about 500, compared to a typical honeybee hive with 50,000 individuals. So you're less likely to see their comings and goings.

But probably the biggest reason they fly under our radar is that they don't make those huge quantities of honey that appeal to us sweets-loving primates. Bumblebees do make little wax pots, where the queen lays her eggs, and they do gather nectar and pollen to fill them to feed their young. But their strategy for getting the species through lean times is different.

"Honeybees make honey to eat over the winter," Hatfield says. "Bumblebees, instead of eating over the winter, they hibernate." In fact, most of the colony dies off at the end of the season in the fall. Only the new queen bees born then survive to start new colonies in the spring.

Honeybees are not a natural part of the North American ecosystem. They're essentially livestock, trucked around to where they're needed in the growing season. "Almost all honeybees pollinating crops are coming from somebody's hive that's managed and tended to," he says. "For example, during the almond bloom in California, honeybees come from all over the country — Florida, New England, the Midwest."

Honeybees were imported to pollinate imported plants, which include many that we think of as iconically American, like apples. But we also eat many plants that are native to this hemisphere, and for those, bumblebees and other native bees are much better pollinators.

"Tomatoes, in order to get better fruit, require what's called buzz pollination — a bee vibrates its wings at a specific frequency, and that causes the pollen to be released from the anthers," he says. "Honeybees can't do that, so honeybees don't visit tomatoes, and that's where bumblebees really excel." Blueberries, peppers, eggplant and squash are other native crops that are also better pollinated by native bees.