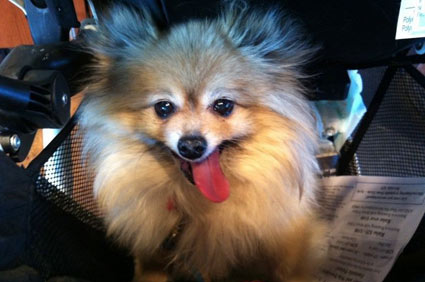 I’ve been thinking about pet loss a great deal since our beloved companion, Mister Teddy, passed away. I like to think of Teddy as a miracle dog who was sent to help me and my daughter, Reagan, through a difficult period. Teddy was a senior Pomeranian who had been neglected — and I felt compelled to adopt him. Our time with him didn’t last a full year, but we bonded deeply in that short span.

Teddy was a unique companion — and the friendship that developed between him and Reagan was profound. Not only was he tolerant of Reagan’s toddler antics, but he relished every moment with her. Teddy was always right next to her, often plopping his 7 pounds of fluff onto her lap. He didn’t mind the fur grabbing, Reagan's squeals of glee or even her occasional crying. When Reagan took her first steps, Teddy was walking beside her, ready to absorb the impact when she tumbled.

When I dared to separate them — if only to give Teddy a break from Reagan — he'd race back to her. And Reagan was just as attached to Teddy: Every morning, she'd toddle over to find her dog, whom she affectionately called “Tebby." Reagan’s babysitter once proclaimed that Teddy was the only dog she ever knew who was allowed to tag along to daycare. Even when they were away from each other, Reagan would sing his name over and over again, and Teddy would act sullen until she returned. 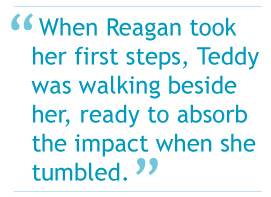 Toward the end of our year together, Teddy’s health took a downward slide. He lost his appetite and was in constant pain. I consulted numerous veterinarians, but no one could pinpoint exactly what was wrong with Teddy. When a scheduled family vacation approached, I was comforted by the fact that he seemed to be on the upswing, showing signs of improved appetite and energy. So I was shocked when I got a call as I was boarding the plane that Teddy was dying and needed to be put down that day. After reassurances from Reagan’s daycare provider — who was like a second mom to him — that she would let Teddy know how much we loved him, I gave the teary consent to let him go.

My loss was painful enough, but it was made worse by the fact that I had to figure out how to explain to a toddler, who was just beginning to use words, that she wouldn’t hold her dog again. Throughout our trip, it broke my heart each time Reagan squealed whenever we passed a dog, exclaiming “Tebby!”

Reagan hunted for Teddy when we got home, and I knew it was time to tell her. I picked her up and held her close as I pointed to a photo on the fridge of Reagan with Teddy on her lap. "You know how we pray every night?" I asked her. "Well, God needed Teddy to live in heaven, so he’s not here anymore. But Teddy is really happy now, and he’s not sick anymore. He gets to race and play with other dogs, and he can eat all the treats he wants. One day, you’ll see Teddy again, but until then, he wants you to remember how much he loves you.”

I was surprised when Reagan seemed to understand. “Bye-bye,” she said and waved at his picture.

Teddy will never be forgotten. Although our time with him was short, every moment was precious. Love is as strong as death — even though Teddy is no longer physically present, his unconditional love left an imprint on Reagan’s heart.