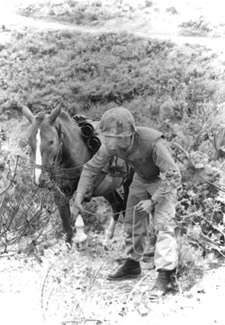 Courtesy of Leatherneck: Magazine of the Marines
Platoon Sgt. Joe Latham was Reckless’ trainer. He taught her to step over wire, take cover during enemy fire and other techniques for staying alive on the frontlines.

Heavy machine gun, mortar and artillery fire blasted around the members of the 1st Battalion, 5th Marines, as they hunkered down in the trenches of Outposts Vegas, Reno and Carson in March 1953. The soldiers, fighting in the Korean War, struggled to hold their positions as wave after wave of Chinese troops attempted to fight their way into the strategic strongholds.

Although dozens of men proved their mettle during those fierce battles, one soldier was particularly indispensible to the effort. Standing almost 14 hands high and naturally equipped with Marine gung-ho, Staff Sgt. Reckless, a remarkable Mongolian mare, scrapped with the best of them and eventually earned the Marines’ highest accolades for her heroism and dauntless character in battle.

The Enlistment of 'Reckless'

U.S. Marine Lt. Eric Pedersen, commanding officer of the Recoilless Rifle Platoon, Antitank Company, 5th Marine Regiment, first laid eyes on the dusty chestnut mare one year earlier at a racetrack in Seoul. Intrigued by her performance, Pedersen offered to buy the horse from her owner, a young Korean boy named Kim Huk Moon. The timing proved ideal, as the boy could scarcely turn down Pedersen’s $250. His sister had recently lost her leg in a land mine accident, and the money would go toward purchasing an artificial leg for her.

After the exchange, “Ah Chim Hai”— Korean for “Flame of the Morning” — accompanied Pedersen back to his base. Although he was taken by the horse’s demeanor in competition, that wasn’t the only reason Pedersen thought to bring the mare back. Shells for the 1st Battalion’s recoilless rifle weighed almost 25 pounds each. Pedersen’s men could carry three or perhaps four at a time, but he expected that Ah Chim Hai, once trained, could carry six or more shells at once. 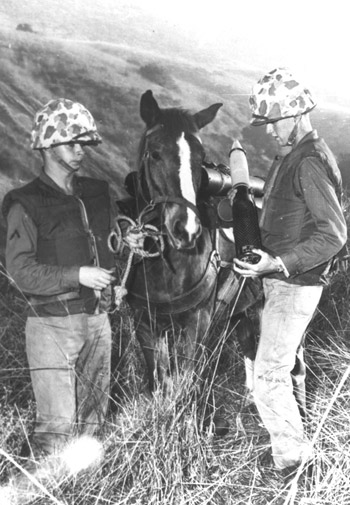 Courtesy of Leatherneck: Magazine of the Marines
Reckless delivered ammo to the recoilless rifle platoon’s firing sites. At first fellow Marines would lead her—later she could make the trip to and from the ammo dump by herself. During just one battle, Reckless made 51 trips under enemy fire, most of them by herself. She was wounded twice but didn’t quit.

Of course, Ah Chim Hai would need a Marine-tough name to commemorate her assimilation into the regiment, and that moniker was an easy choice. The soldiers applied the same nickname to their new member as they had to the platoon’s main weapon: Reckless. The 75mm recoilless rifle first showed up on battlefields during World War II. It took three or four men to carry the hulking weapon, and when fired, its blast was so loud as to give away its triggerman’s position. You took a chance using the thing—it was a reckless choice. Reckless the horse, however, demonstrated a different definition of the term. Over and over again, Reckless put her own instincts of self-preservation aside and proved she was as hard-core as any battle-tested Marine.

On the Front Lines

Pedersen’s men were already in the midst of combat, so there was little time to assimilate Reckless to the din of battle and incredible boom of the recoilless rifle. Platoon Sgt. Joseph Latham, a young Marine who had experience with horses, was charged with putting Reckless through her paces. He saw first to lodging, building a bunker and small fenced pasture where Reckless could graze. Latham also brought in a supply of barley, sorghum, hay, rice straw and the essential salt block for the horse’s provisions. But, it wasn’t long before Reckless betrayed her palate’s true desires. She soon became renowned about the camp for her insatiable appetite, chowing down treats like beer, scrambled eggs with pancakes and coffee, chocolate bars and pretty much anything offered to her.