Home ›
Our Pet Experts ›
Mikkel Becker ›
Should You Train Your Cat to Use the Toilet?

Should You Train Your Cat to Use the Toilet? 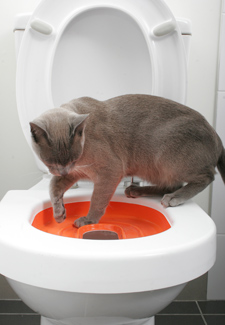 A toilet-trained cat may seem like something only Hollywood could dream up, but you really can teach your cat to use the potty — and say goodbye to kitty litter forever. Inspired by a scene in the Ben Stiller film Meet the Parents, Jo Lapidge created the Litter Kwitter after she grew tired of cleaning up her cat’s litter. The potty training system is so effective that Lapidge claims it takes less time to toilet train a cat than a child. Cats bury their waste in their litter largely to get rid of the smell. The Litter Kwitter works on the odor-elimination concept by giving cats the same satisfaction of hiding elimination smell by using the toilet, rather than burying their waste in the litterbox. Although cats can be trained to use the toilet without the Litter Kwitter, its step-by-step system is the simplest way to gradually introduce your cat to the toilet.

The Litter Kwitter is ideal for people looking to end litterbox woes of gritty floors and frequent cleanings. Bold, confident cats 3 months of age and up are ideal candidates for potty training.

But potty training isn’t the right fit for every kitty. Fearful kitties, arthritic felines or cats who already have difficulty using the litterbox are not the best candidates for toilet training. Going to the bathroom outside the litterbox is one of the top reasons cats are surrendered to shelters, so teaching your cat to consistently go in a designated area — either a litterbox or a toilet — is much more important than eliminating litter from your cat's routine.

Curious about how toilet training a cat works? Wondering if it could work for your cat? Here’s the step-by-step process to get your cat reigning on the porcelain throne with the Litter Kwitter. (It does everything but teach your cat to flush!)

How the System Works

The Litter Kwitter system consists of four color-coded training trays that fit over the rim of a standard toilet. The first tray is a white rim that fits over the toilet seat and anchors the other trays. The second tray is red and has no hole but holds four to five cups of litter just like a regular litterbox; it hooks onto the white tray. The next two trays each have a hole in the center with a lip that holds litter. As your cat gets more confident with the toilet, you will change from the amber tray (which has a fairly small hole) to the green tray (which has a bigger hole). The trays have a built-in ridge to keep litter from falling in the toilet. Each step in the training process takes about two to three weeks.

Start by placing the red tray (which has no hole) inside the white tray; put them both on the floor of the bathroom. Show your cat the litter and place her inside the tray. Put the regular litterbox away so her only choice is the Litter Kwitter system. Clean the tray regularly throughout the day with non-ammonia-based cleaners. After meals or playtime, or when your cat wakes up, she should be taken to her bathroom area and praised for proper elimination. If you have more than one cat, you will need to get them used to sharing one litterbox before expecting them to share the Litter Kwitter and, eventually, one toilet. Your cat should only move to the next level of training once she has made a habit of using the first tray without any accidents. If you have multiple household cats, progress at the pace of the slowest learner.