Soggy Doggy Doormats: The Story Behind These Absorbent Mats for Dirty Pets 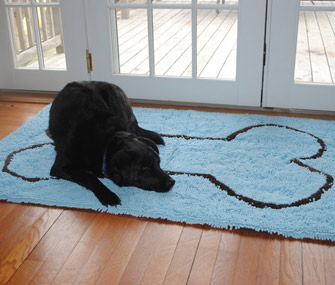 Joanna Rein is a longtime dog lover. But when her family’s new puppy, Buddy, tracked mud and moisture all over her Westchester, N.Y., home, she was not pleased. Little did she know that his enthusiastic, sloppy antics would one day inspire a flourishing business: Soggy Doggy Doormat.

Boning Up on Business

Rein, a former college basketball player at Princeton University, got her MBA at Northwestern University’s lauded Kellogg School of Management with a career as an athletic director in mind. But when she graduated, her now-husband was living in New York City, so instead she wound up in marketing at hair color giant Clairol and eventually freelancing for beauty companies like Revlon and Helen of Troy.

That turn of events proved fateful.

Barking Up the Right Tree

In 2009, Rein was living in Westchester, caring for her four small children and loosely toying with product ideas as they popped into her mind. That’s when three important things happened.

First, her husband was in commercial banking, an industry that felt suddenly unstable. She was concerned that he could lose his job and felt she needed to find a way to contribute — no easy feat after five years out of the job market.

Next, Rein and her family had recently rescued a loyal and lovable dog,a suspectedLabradorandBorder Colliemixthey named Buddy. Every day, she watched as her delighted kids let himinside after he romped around in the backyard; he would leave dirty paw prints all over the family room. “I kept thinking I wanted [to make] a dog-specific doormat myself!” she says with a laugh. “But I’d thought up so many harebrained product concepts throughout the years, I figured I wouldn’t actually do it.”

The final straw was when Rein spotted one of her old product ideas brought to life: a wipe designed specifically to clean the inside of windshields. She realized that she needed to take her ideas seriously — and to the next level.

Her beauty industry experience paid off: Thanks to those years, Rein knew just enough to take a product from inception to launch with the right approach. “Working at Clairol, I learned that you’re not only selling beauty products; you’re selling an image: how consumers perceive themselves and want to be perceived,” she explains. “That was very helpful in starting a business.” That meant, for instance, that the company’s name should allude to the product’s function, but not make the dog sound grubby or dirty — rather, more charmingly messy. Hence, Soggy Doggy was born.

Once Rein committed, the development process began. But it wasn’t always a smooth ride. The first task was finding the right material. She wasn’t sure where to start, until one day at the children’s swim meet, she noticed a young diver toweling off with just this little piece of chamois. It was clearly very absorbent, so she went out and bought a bright orange ShamWow and had it cut, constructed and tufted with no-slip backing, according to her specifications. When it was finished, she was excited to bring it home and test it. “I put it by the door, and Buddy took one look at it and refused to walk on it,” she says. “He walked around it, jumped over it. Maybe because it was bright orange?”