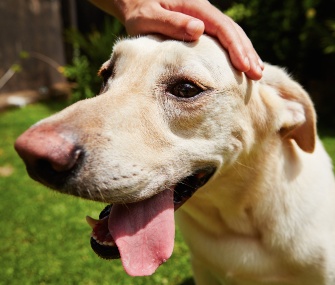 A new study finds that dogs don’t take that much stock in your words of praise. Instead, they’d rather you just pet them — and they won’t get tired of it. Researchers first evaluated 42 shelter and pet dogs who were brought into a room one at a time. One person would offer only verbal praise while the other pet the dog. In the second part of their study, 72 shelter and pet dogs were placed in a room with one person — owners for the pet dogs and a stranger for the shelter dogs. The person would pet or praise the pooch, or have no interaction with him at all. They found that the dogs showed more interest in the people who were petting them and showed no more interest in verbal praise than when there was no interaction at all. "I spend half my day talking to my dog," said study co-author Dr. Clive Wynne, professor and director of the Canine Science Collaboratory at Arizona State University. "She always looks like it's valuable to her. It's quite a shock to discover that what we say to dogs doesn't seem to be rewarding to them after all." The study was published in the journal Behavioural Processes. — Read it at the Huffington Post