Home ›
Our Pet Experts ›
Kristen Seymour ›
Survey Results: How Much Dog Training Do Vetstreet Readers Do?

Survey Results: How Much Dog Training Do Vetstreet Readers Do? 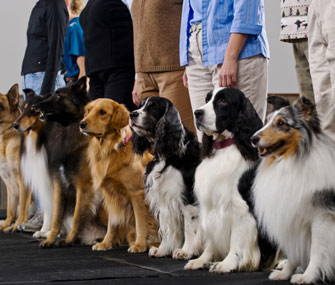 Thinkstock
Almost half of our survey respondents said they'd attended training classes with their dog.

Puppy kindergarten. Agility classes. Reading a book. Following along with a training app. Taking lessons from fantastic online training videos. When it comes to training your dog, there are tons of options and plenty of reasons people choose one over another, so we found ourselves wondering about our readers. What kind of training does the average Vetstreet reader do? How successful are they? What do they find easy and what tends to be challenging?

After surveying more than 1,800 readers, we have a few answers!

It's safe to say that all dog owners prefer their dogs to go to the bathroom outside (or at least in designated areas), but readers had varying degrees of luck with house training.

Close to half of respondents said that, while there were a few challenges to overcome at first, their dog caught on quickly. Another 24 percent claimed it "couldn't have been easier," while 16 percent said it was not easy and took a long time, although, eventually, they were successful. Just 4 percent claimed it was simply impossible, and 6 percent answered with not applicable (due to having a new dog they were just beginning to train, having medical or other issues at play aside from training or owning a dog who was house-trained when they brought him home).

Who's Doing the Obedience Training?

It turns out that Vetstreet readers are very likely to do some sort of obedience or advanced training with their dogs — less than 8 percent of respondents stated that they'd never done any sort of training at all with their pups.

Who's Going to Class?

Of the group who reported attending training classes, nearly half (47.5 percent) said they had gone to a basic, multi-class training course. Another 30 percent completed a multi-week course that awarded an official certification and 16 percent attended a specialty course. About 7 percent of respondents said they'd gone no farther than a one-time introductory puppy class.

We've also got info on what tricks and commands readers reported their dogs knowing well (or not learning at all, ever, despite plenty of effort... ), which you can catch back here on Vetstreet near the end of the month. In the meantime, be sure to let us know in the comments where you come in on these questions. What kind of training have you and your dog completed?