Tarantulas: Can These Large, Hairy Spiders Actually Be Good Pets? 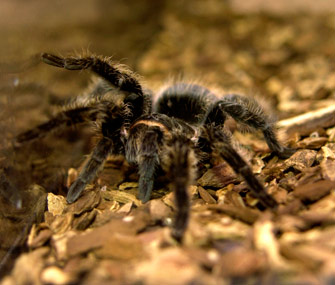 Thinkstock
Our expert says you wouldn't pet or carry your tarantula any more than you would your goldfish.

Most people don't use words like "fun" when it comes to spiders, especially big ones. But Linda Rayor of the Department of Entomology at Cornell thinks that tarantulas can make awesome pets for the right people.

"There are a ton of perfectly lovely, interesting, beautiful tarantulas that you can start with that are really fun," she says.

One thing that fans like about these arachnids is that they're pretty. Really! Rayor is a fan of the Mexican Redrump, which she calls "calm, interesting, gorgeous." And her favorite group is called the "ornamentals."

What's really cool, though, is that they're both beautiful and deadly: Some owners may find watching the tarantulas' natural behavior fascinating.

"The speed at which they attack their prey is very impressive," says Holli Friedland, who keeps tarantulas. "You drop a cricket in there, and it's just milliseconds and they're already eating it."

OK, but what you really want to know is Are they deadly to me? There are definitely some species with more toxic venom that aren't for beginners. But Friedland, who has about a dozen tarantulas of various species, has never been bitten, and Rayor, who's had up to 30 species at a time in her lab over almost 20 years, says on the rare occasions it's happened to her, it was no big deal.

"With all the spiders, about 50 percent of bites are dry bites with no venom," she says. "I've been pinched by a bunch of spiders, and they mostly don't break your skin. When their fangs are big enough that they break your skin, that's what hurts, not the venom."

You (and other household pets) also need to be careful of the urticating hairs that some species kick off as a defense. "They itch like the dickens," Rayor says. "You don't want to get them in your eyes or breathe them in."

But she says that none of this should ever happen if you're keepingtarantulasproperly, because these are not pets for cuddling. "Tarantulas shouldn't be handled— they're not puppies," she says. "They're more like fish."

So Rayor doesn't pet or carry her tarantulas any more than you would your goldfish. If the spiders need to be moved from one place to another, she uses a cup. Friedland suggests something like a clear food container. "I put that on top and then slide the lid under their feet, and then they're in the container," she says.

Friedland does sometimes handle the very calm species, but even then, she doesn't reach in and grab. "I put my hand down in the cage, and with my other hand, sort of scoot [the spider] onto my hand and encourage it to walk in that direction, and it climbs onto my hand," she says. "I don't [just] pick it up."

Minimal handling is not only for the owner's safety, but also for the pet's. "Of the ones that you might handle that aren't particularly dangerous, the exoskeleton is relatively thin, so if you drop them, they can go splat," Rayor says. "That's not good for the tarantula."