Teach a Cat to Go In Her Crate on Command 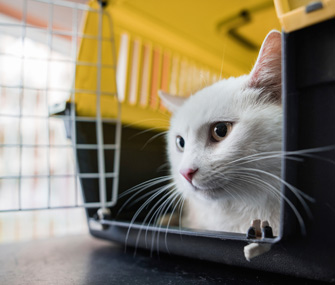 iStockphoto
Your cat's crate isn't just meant for transporting her from place to place — it can be a cozy "den" where she can eat meals and hang out.

Have you ever opened a package and tossed the shipping box aside — and then discovered your cat curled up inside it? Nearly every cat loves a cardboard box. The elevated sides and close-to-body size make it a safe, comfortable kitty resting space.

It’s only logical, then, that if cats like being in boxes, they should enjoy being in a cat carrier — after all, a carrier is just a fancier version of the cardboard box. Unfortunately, most cats don’t have a good relationship with their carrier, primarily because they have learned to associate it with things that are outside their comfort zone, like traveling to the vet or the groomer. In addition, the typical cat owner's strategy for getting a reluctant kitty into a carrier is to force her in by any means necessary. It’s no surprise, then, that the appearance of the carrier or crate can cause a cat to panic — for many, it’s a sign of bad things to come.

What would you say, then, if I told you that you can teach your cat to go voluntarily into her crate? Most cat owners I work with are skeptical when I suggest this. I understand — if you have ever wrestled a resistant cat into a carrier, it’s a pretty serious leap of faith to believe that your feline would ever enter the crate of her own free will. But you have to trust me on this one.


Teach your cat to see her crate as purrniture. Don’t wait until it’s time to head to the vet or groomer to get your cat’s carrier out — instead, put it where she can easily access it, place meals, treats, food puzzles or toys inside and allow her to explore it on her own. This hands-off strategy conditions your cat to see the crate as non-threatening and welcoming, and as a place she goes to find good things.

Capture the behavior with a cue. Once your kitty is confidently and comfortably entering her crate, you can add a verbal cue, like “carrier.” Each time she steps into in her crate, capture the behavior by saying the cue and rewarding her with a special treat served inside the crate or a favorite toy to play with in her carrier. Once she is familiar with the cue, start to give it earlier — as she begins to walk toward the crate instead of once her front paws are inside, for example. With enough repetition, your cat will learn to respond to the cue by voluntarily getting in the crate, even if she’s across the room when you give the command. And of course, always reward her once she’s inside her carrier.

Entice her with a lure or target. Lure-based training is an alternative to capturing: Instead of waiting for your cat to wander into her crate on her own, lure her in with a treat or toy and reward her for getting in the crate. Pair the lure with a verbal cue, like “carrier,” or a hand gesture. Once your cat is consistently following the lure into her crate, begin to fade it by giving the cue and waiting a few seconds before presenting the lure. Reward your cat for any response to the verbal cue or hand gesture, even if it’s just a step or two toward the crate. Eventually, she will learn that responding to the cue by getting in her crate earns her a reward. Alternatively, if your cat is target trained, you can teach her to pair the cue with the motion of going into her crate by having her touch a target inside her carrier.

Motivate your cat to explore her carrier by delivering meals, treats, toys or catnip or by petting, playing or doing other things she enjoys inside the carrier. Do this on a daily basis, not just when it’s time to go to the vet or groomer. Cats thrive on routine, so the simplest way to teach your cat to willingly enter her crate is to practice often.