Teach Your Dog the Right Way to Play 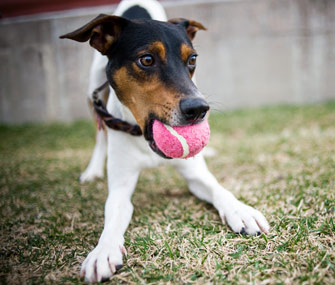 Do you like playing with your dog, or do you approach it as one more pet care chore? Playing is fun — especially when the game is engaging for all those involved. Play can build trust, teach self-control, make exercise irresistibly fun — and stimulate your dog’s mind. Here’s how you can get the most out of the games dogs like to play, for you and your best friend.

When playing with your dog, remember that all games should have consistent, predictable rules. Here's a quick guide to the right way to play some common games and how to avoid encouraging the wrong behaviors.

Fetch is a game that builds trust between you and your dog. It teaches your dog valuable skills, like returning to you and surrendering an object.

When playing fetch, always use a size-appropriate ball, to prevent your dog from choking. Rather than chasing your dog to get the ball back, train him to run back to you with the ball. Start by running backward and calling your dog's name from a short distance away, to encourage him to follow you. The instant he turns to come to you, pull another ball from behind your back and throw it.

The next step is to teach your dog to surrender the ball he has just fetched. When your dog returns to you with the ball, say “drop it” and then present the second ball. Once he is able to reliably and happily drop his ball on cue, ask for a “sit” or "down” before you throw the second ball. This teaches your dog that he needs to return the ball to you and remain calm for the game to continue.

When playing tug, your dog grabs and pulls a toy, often a rope, with his mouth while you hold on to the other end. When done properly, this game can hone your dog's self-control and teach him how to calm down when he’s excited.

Tug can be a productive outlet for energy as well as a way for you to bond with your dog. Unfortunately, when done improperly, tug can cause dogs to learn poor manners, such as putting their teeth on skin, jumping up and pawing. Tug can also overstimulate easily excitable dogs, and it may be hard to calm them down. You will need to determine if tug is the right game for you and your pet. If you decide that your dog can handle a game of tug, be sure that only members of the household who can consistently follow the rules are allowed to play this game with your dog, in order to avoid fostering any bad behaviors.

The first rule of tug is that your dog needs to drop the tug toy on your signal. Start by teaching him "drop it." Once he has mastered this command, then you can switch to an official tug toy.

Designate only one or two toys as “tug toys,” to prevent your dog from seeing everything, such as a child’s stuffed animal or your favorite shirt, as fair game. When you aren’t playing the game, put the tug toys away. That way, bringing them out becomes the signal that the game is on.

Once you’ve brought out the tug toy, don’t let your dog take it until he is invited to do so. This will prevent your dog from being the one to initiate the game whenever he gets the urge.