Home ›
Our Pet Experts ›
Linda Lombardi ›
Tempted to Get a Pet Turtle or Tortoise? Read This First

Tempted to Get a Pet Turtle or Tortoise? Read This First 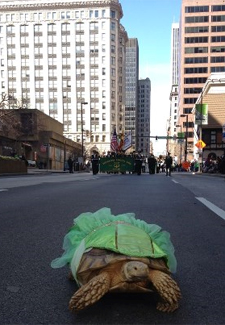 Photo by Jen Pawloski
Wasabi, in a dress, strutting her stuff in a St. Patrick's Day Parade.

Even people who don’t like reptilesoftenare attracted to turtles and tortoises. They’re cute and appealing. And they seem like the kind of simple pet that you keep in a nice tank, toss food at once in a while and that’s it.

Even Lisa Chicarella thought that way at one point. "I was under the impression they were like goldfish in shells," she says.

Now Chicarella knows there’s a lot you can get out of owning a tortoise: Her African spur-thigh tortoise, Wasabi, is a therapy animal with Pets on Wheels in Maryland. But she also knows how much work it takes to live with one.

After Chicarella's dog, Chief, died, she talked to the director of the therapy organization. “I said I didn’t have a therapy animal anymore; too bad Wasabi couldn't be one. She said, ‘Why not?’”

Wasabi turned out to be a big success. She’s famous for wearing a dress, which is a great icebreaker, but it started out for practical reasons. Lesson No. 1 in reptile keeping is that these animals don’t produce their own body heat: Wasabi needs to wear thermal wraps to keep her warm when she works in the winter. The dress conceals them, but it was such a hit that now she wears it all the time.

The tortoise got her name because "she’s hot stuff," Chicarella says. "When I first got her, she literally wouldn’t come out of her shell for two weeks. But once she popped out, she never went back in."

However, while owning a dress-wearing therapy tortoise can bepretty cool, it comes at a price.

Wasabi’s species is common in the pet trade, but buyers rarely realize what they’re in for. "When you get them, they’re tiny — about the size of an egg,"Chicarellasays. She got Wasabi as an adolescent weighing about 12 pounds, and now, seven years later, she tips the scales at more than 40 pounds and is very active and strong — with little respect for human property.

"For a tortoise Wasabi’s size, drywall is simply a suggestion," Chicarella says. One of her pet's favorite pastimes is moving the furniture around. "She’s always into something," she says."She’ll push the ottoman around all day." Wasabi has broken several kitchen chairs, which Chicarella sometimes discoversby sitting on them.

And that's only the start: Wasabi will keep growing till she’s about 100 pounds. But, Chicarella says, "to keep her locked up wouldn’t be fair" because she’s so active and, yes, intelligent. "She’s very much a thinking little being. I can see her trying to figure out things. I tell her 'No,' and she hisses at me."

Along with Wasabi's challenging day-to-day management, Chicarella has to plan for the long term. Wasabi is expected to live 50 to 75 years, so she’s provided for in Chicarella's will.

A big problem with turtles and tortoises is that the most common species in the pet trade are not necessarily the most suitable pets. Chicarella says that while for her, Wasabi is worth it, she recommends that no one get an African spur-thigh. "For the record, they’re terrible, terrible pets," she says. "I enjoy her, but it’s an amazing amount of work. They’re not for the faint of heart."

The most common semiaquatic turtle, the popular red-eared slider, also presents a case in which buyers generally don’t know what they’re getting into. While it has been illegal for some time to sell a slider that's less than 4 inches long, the law is not well-enforced, and buyers aren't told that when that little turtle grows up it will be big enough to need a 75-gallon aquarium.

Because turtles are messy eaters and produce a lot of waste, their tanks need more filtration than would be needed for a fish tank of the same size. And no matter howoftenyou see them kept in purely aquatic environments, such setups are not ideal. An aquarium — if you use one — needs to be set up specifically to meet the turtle's needs. "They’re not fish," says Barbara Daddario of the New York Turtle and Tortoise Society. "Most still need a place to haul out and get completely dry."

So if you’re interested in a turtle or tortoise, it’s critical to do your research — both about individual species and about the reptiles in general.