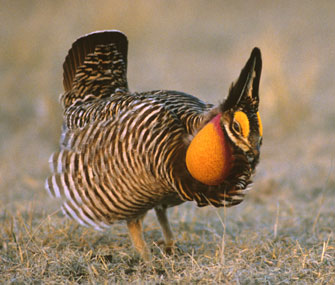 It’s spring, and birdsongs are starting to fill the air. The tunes are so pretty that it’s easy to forget what this soundtrack is all about: the birds and the bees.

In fact, the song we’re hearing is mostly male birds holding forth about how great they are, a message that has a different meaning depending on who’s listening. “It says to the girls, ‘Hey, I’m fit, come hither,’ and it says to the guys, ‘Get lost or there could be trouble’,” says George Armistead, events coordinator for the American Birding Association.

Armistead has spent many years as a full-time bird tour leader and guided tours on every continent. Throughout his career, he has seen some interesting things when it comes to birds and mating. As Armistead says, “In the process of looking for birds, we see both things we want to see and, sometimes, would rather not see.”

This has inspired Armistead to develop a talk he gives called — what else? — “pOrnithology: The Birds and the Birds and the Bees.” He agreed to tell us some of the stories, for which we’re grateful — we think.

For many people, birds are a symbol of devotion. “One of the most common questions I get asked is: Do birds mate for life?” says Armistead.Sadly, the answer is mostly no. But he’ll reassure you that most birds are monogamous — depending on how you define monogamy.

“There are different versions of monogamy,”Armistead explains. There are birds that are more or less serial monogamists — they pair up for a breeding season, but might take a different mate the next season. This includes most familiar songbirds like warblers and sparrows.

Then there are the birds that are called “socially monogamous.” They’ve got a mate, and they tend a nest together, but it’s what you might call an “open relationship.” These birds fooled even scientists for a long time, until DNA testing allowed researchers to find out who really was the daddy of a clutch of baby birds. For one species, the fairy wren, almost three quarters of the young are the result of what’s politely called “extra-pair fertilization.”

Other birds don’t even bother to maintain a surface veneer of respectability. Take species like the sage grouse and prairie chicken, where in breeding season the males all gather to display the goods in a process called “lekking.”“These lek sites go back many decades if not centuries, so the females know exactly where to go,” says Armistead.

The males start the show at the crack of dawn and perform a song and dance, and the females watch to see who does the traditional dance the best. They pick a male, mate and move on.“That’s pretty much the male’s involvement, in these species,” says Armistad. “He’s meant to look good, be fit, breed and then the female takes it from there. The females don’t come to these leks looking for long-term meaningful relationships.”