The Booming Business of Pricey Pet Burials Around the World 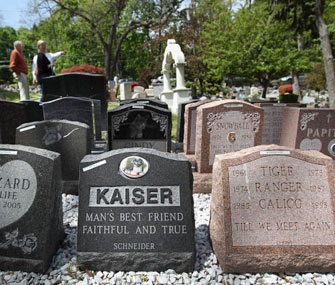 For most pet owners, a four-legged family member’s passing can be deeply distressing, so it's not surprising that many people spare no expense when it comes to memorializing their pets. In the United States, owners have been known to host elaborate burials, shelling out for extravagant cemetery plots, private cremations, pricey caskets and even memorial “diamonds” made from pets' ashes and locks of fur.

But the trend is also happening in other parts of the globe — from Japan to the U.K., people are splurging on over-the-top goodbyes for dearly departed Fidos and Fluffys alike.

The Big Business of Pet Bereavement

For many animal lovers, letting go of a beloved companion is no longer as simple as just leaving the vet’s office with a case of the sniffles, a box of tissues in hand.

According to a recent article by Lynn Parramore, “Why the Rich Are Sending Pets on a Diamond-Studded Trip to the Afterlife,” the average cost of a pet funeral in America nowadays starts at $800.

And that’s at the low end.

According to stats referenced by Funeral Business Advisor, about 11.6 million dogs and cats die each year — and 50 percent of their owners opt for a private burial over the more traditional mass cremation.

In fact, the American Society for the Prevention of Cruelty to Animals estimates that, since 2004, more than 750 funeral homes, crematories and cemeteries specifically for pets have popped up across the nation.

Furry Companions — for All of Eternity

At Resthaven Memorial Gardens in Frederick, Md., people have had the option to bury their animals within the cemetery's "Petland" section since 1974, but the cemetery is getting ready to unveil an even more intimate offering, the Garden of Faithful Companions, where owners can be laid to rest with their pets.

“We have seen a large increase in people wanting to see what is available, and then choosing to prearrange for their pets, just as they have for themselves,” says general manager Bill Barrett.

The price tag for these novel arrangements range from modest offerings to private family mausoleums costing upwards of $450,000.

Across the pond in the U.K., people are also demanding to spend the afterlife with their pets.

At a cemetery near Cornwall, more than 30 owners have already been buried beside their furry companions — and another 120 have reserved shared plots, paying as much as $5,000 for their special future resting places.