The Dogs of the RMS Titanic 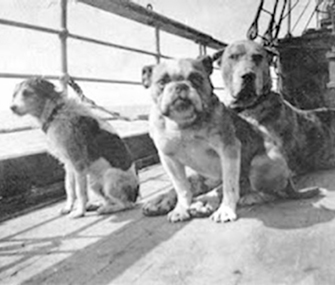 April 15 marks the 100th anniversary of the impossibly tragic Titanic disaster. A variety of events will commemorate the event, including the rerelease of James Cameron’s 1997 blockbuster film, Titanic, now remastered in 3-D, and a Memorial Cruise aboard the MS Balmoral leaving from Southampton, England, and retracing the ship’s path to where it sank. But most interesting to us is an exhibit at the Widener University Art Gallery in Chester, Pa., called “RMS Titanic: 100 Years,” which acknowledges, among other things, a much-forgotten group of passengers: the dogs!


According to MSNBC.com, the show highlights a dozen pooches who were aboard the sinking ship, three of whom lived to bark the tale. For these dogs, it paid to travel first class. The survivors were all on the smaller side, all hailed from New York and — most important — were kept in their owners' cabins instead of in the on-board kennel, a lifesaving distinction. Lady, a Pomeranian puppy, was saved by her owner, Margaret Hays, who wrapped the dog in a blanket and sneaked her onto a lifeboat. (Apparently, people assumed she was carrying a baby.) The other dogs who made it to land were a Pekingese named Sun Yat-sen, owned by Henry and Myra Harper (of Harper & Row publishing), and another Pomeranian, owned by Elizabeth Rothschild.

Unfortunately, the rest of the stories do not have such happy endings, but perhaps that makes them even more important to remember. Philadelphia coal magnate William Carter was traveling with his family, which included two children and two dogs. The patriarch lied to his children when it became clear that they would have to abandon the ship, promising that the pups were safe in order to persuade them to leave their pets behind and save themselves. The family survived, but they lost daughter Lucy’s King Charles Spaniel and son Billy’s Airedale. John Jacob Astor IV and his wife lost two Airedales, named Kitty and Airedale. A Fox Terrier named Dog was also lost in the ocean liner-iceberg collision, which suggests that obvious pet names were en vogue at the time. But probably the most heroic — and heartbreaking — canine-related tale featured in the Widener exhibit is that of Ann Elizabeth Isham, who left a lifeboat in hopes of saving her Great Dane but never returned. Rescuers found her several days later, floating dead in the water, still holding tight to her beloved dog.

Forget Kate and Leo! That is a Celine Dion moment if ever there was one.