The Many Wondrous Things Dogs Can Do for Human Health 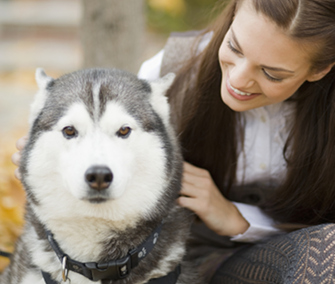 Dogs have always been man’s best friend, but new research into our health and well-being explains better than ever just why this is.

Doctors say that the fuzzy beast begging for a treat from you may just be integral to preventing heart disease, beating cancer and even overcoming grief.

What’s the secret link? There are a few, actually, ranging from the extra steps we take each time we set out for a walk together to the myriad benefits we derive from the bonds we share with our pets.

So, go on, throw that dog a bone: He might just be better than the proverbial apple a day for any human in search of optimal health.

The Key to a Happier Heart

It’s long been known that our furry friends keep us in tip-top shape, thanks to all of that hoofing around we do with them. According to a study published in the Journal of Public Health, “The odds of achieving sufficient physical activity were 57 percent to 77 percent higher among dog owners than with those not owning dogs.”

Another study showed that 60 percent of owners who took their pets for regular walks met federal criteria for moderate or vigorous exercise by doing 30 minutes of active exercise a day, compared to 20 percent of the population sans canines.

Better yet, dogs may be the ultimate excuse-busters: Pregnant women who own dogs walk more than those who are pet-free, as well as people who live in colder climates. A study conducted in Calgary, Canada, discovered that canine owners took to the streets just as often in winter as they did in summer — and significantly more often than non-dog folk in the city.

Participation in regular physical activity, the study notes, is important for the prevention of many chronic diseases, including obesity, osteoporosis, type 2 diabetes, hypertension and cardiovascular disease, among others.

There’s an even more surprising reason why pets may be good medicine for our tickers. The evidence, dating back to the first study of its kind conducted in 1979, showed that animal owners survived heart attacks better.

“It was a landmark study,” says Dr. James Serpell, Ph.D., professor of animal welfare at the University of Pennsylvania School of Veterinary Medicine. “Many of the early studies showing improvement in blood pressure and heart rate following heart attacks have since been replicated.”

In general, research has shown that pet owners have lower blood pressure and cholesterol levels — and their hearts cope better with change.

According to Dr. Serpell, there was one thing that no one could explain until recently: How were pets producing these effects on people?

Researchers have now traced the missing link to a quaintly-nicknamed brain chemical known as oxytocin.

“We’re starting to hone in on the possibility that these relationships with pets trigger the secretion of the neurotransmitter oxytocin in the brain, also known as the ‘trust hormone’ or the ‘cuddle hormone,’ ” says Dr. Serpell. “It’s known to aid in the formation of strong social attachments, particularly between mothers and infants.”

Doctors also know one other key fact: Oxytocin represses the secretion of stress hormones like cortisol.

“We’ve known for a long time that chronic stress has a damaging effect on people’s health,” says Dr. Serpell, “and we know that one of the reasons is that it suppresses the immune system. If your immune system is suppressed, you’re more vulnerable to infectious disease, as well as cancer and cardiovascular disease.”

In other words, every time you give your pet a pat, your endocrine system shifts into attachment mode, causing you to stress less — and potentially live longer.

This mounting body of evidence has been so compelling that it’s spawned a whole new field of study — anthrozoology — that examines the role of animals in the lives of humans and vice versa.

That includes the effect of pets, and increasingly, therapy animals, on our mental health.

So far, studies have shown that dog ownership helps children develop empathy (for other humans), alleviates mild depression (often reducing the need for medication) and enables those with serious mental illness to recover faster.

The benefits of having an animal nearby, researchers say, are threefold: They provide “empathy” and “therapy,” help us rebuild social bonds, and serve as family in place of, or in addition to, our human “pack.”

They can also be a panacea for grief when we lose someone close to us. “I see it on a daily basis,” says animal doctor Amber Andersen, DMV, who practices in Los Angeles. “Elderly people, who’ve lost a spouse and had the benefit of having an animal in their lives, have improved their overall well-being. The animals become much more significant.”

“People are using their pets as a form of nonhuman social support,” says Dr. Serpell. “We know that people who have support networks are healthier than people who don’t, and we think that people are feeding into those systems via their pets.”