Start With the Animal 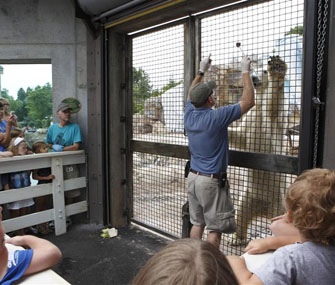 Courtesy of PGAV Destinations
A trainer and bear are at one of two training panels on exhibit.

To create a state-of-the-art exhibit, Tarpley says, you start with the needs of the specific animal. "I start with the most basic stuff. How much time will an animal spend in a tree? Where is it from? A desert? A rain forest?"

Much of the detailed information about each species comes fromAssociation of Zoos and Aquariumshusbandry manuals written bypeople who've worked with that species for decades. Still, individual animals may surprise you, as she found when designing a giraffe exhibit for the Columbus Zoo.

Assured that giraffes would never step over a swathe of large stones, called rip-rap, or large fallen trees, she used those as natural-looking barriers to keep the giraffes from eating expensive decorative trees. However, when the giraffes were brought into the finished space, "they walked up to the rip-rap, thought about it for, like, three seconds, then walked on through," Tarpley says.

It's also important to account for keepers who may have slightly different ways of working with the same species in different facilities.

"We've done five or six polar bear exhibits, but every time we go to do a new polar bear exhibit we have to sit down and talk [with the keepers] about how [they] handle bears," she says. "How much training do you do? How close do you get to them? Are you with them all day long? Do you feel comfortable transferring them every hour to a different space, or do you want them to stay in one yard all day long? Do you feel comfortable with them going down and up vertical spaces?"

The needs of the keepers are critical, because they're the ones who interact most with the animals and play a major role in making sure their needs are met, and how they do that is evolving all the time.

"We're creating habitats that need to function for the keepers, because the keepers are becoming more and more hands-on, when oftentimes before they would be somewhat hands-off — feed the morning chow, leave [the animals] alone all day, maybe put in a toy and check a couple times," Tarpley says. "We're seeing a definite evolution of keepers being more specialized and tasked to fewer animals, and spending more time with animals throughout the day."

The result is that though she used to think about building permanent enrichment facilities into exhibits — like a digging pit for bears, for example — now the priority is making it possible for keepers to change things frequently.