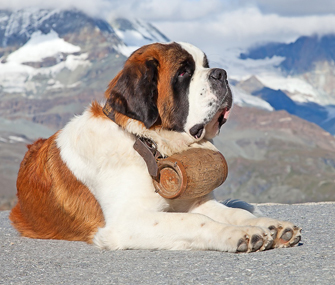 Bigstockphoto
This Saint Bernard's cask is all for show.

Odds are that the phrase “rescue dog” triggers a mental image for you of a shaggy, brown-and-white Saint Bernard, toting a little wooden barrel full of restorative brandy on its collar. Although Saint Bernards never actually lived such a picturesque life — there are no records of those brandy casks, making them a mountain myth — their accomplishments are still impressive.

The massive dogs are named for the ancient Hospice du Grand St-Bernard, a monastery in the St. Bernard Pass between Switzerland and Italy. This high mountain pass — over 8,000 feet, in fact — is snowed in much of the year.

In the mid-1700s, the monks who inhabited the isolated monastery began using Saint Bernards to help locate and recover travelers lost in the treacherous route referred to as the “White Death.” The all-time rescue champ was Barry, a Saint Bernard who sniffed out more than 40 people between 1800 and 1812.

Today, Saint Bernards in the region no longer venture out on rescue missions. Instead, they’re celebrated and pampered at the St. Bernard Museum, in the Swiss village of Martigny, which includes history exhibits and a breeding kennel.