The Science — and Common Sense — Behind Using Herbal Remedies in Pets 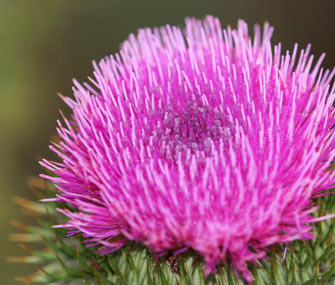 Thinkstock
Milk thistle derivatives are some of the most commonly prescribed plant compounds in veterinary medicine.

Prescribing herbal remedies for animals is an expanding field within veterinary medicine. Practitioners are increasingly using these substances to replace or augment existing therapies. As a result, I have recently created a course for the veterinary students at my university called “medical herbology.” In my course, we explore not only the safety and effectiveness of herbs, but also their interactions with medications. This is an important but much overlooked aspect of herbal medicine.

For example, I have seen St. John’s wort extracts advertised as a treatment for separation anxiety[i] in dogs. However, labels usually fail to warn consumers that this herb can reduce or alter the effectiveness of a wide array of drugs, including chemotherapeutic, cardiac, immunosuppressant, analgesic and anticoagulant medications.[ii][iii] So, a well-meaning owner who gives a dog St. John’s wort before chemotherapy to reduce stress may unwittingly reduce the drug’s ability to fight cancer. This is one reason why it is so important to have veterinary input before giving any herbs to your pets, especially those with medical problems.

Because of the potential for St. John’s wort to change drugs’ efficacy, I prefer valerian root extract, sometimes called “herbal valium,” for dogs with anxiety. Many cats enjoy rolling around in crushed valerian root, nibbling small quantities and exhibiting behaviors similar to those affiliated with catnip. Historically used as an antiepileptic herb,[iv] valerian is commonly combined with other calming herbs for dogs.

While I encourage my veterinary colleagues to carefully weigh the risks and benefits of herbs and to look at the scientific literature before prescribing anything herbal, the fact is that little research exists on using herbs in dogs and cats. As a result, we veterinarians often need to look at what has been done in human clinical trials and extrapolate from there. For example, science shows that a Chinese herb known as astragalus root may improve appetite and body weight in humans with incurable cancer.[v] Astragalus appears to support and/or regulate immune function. It seems to inhibit recurrence of cancer, prolong survival times and reduce adverse effects of conventional cancer care.[vi][vii] Most dogs tolerate astragalus well, though some may not like the taste.[viii] Astragalus, however, also interacts with some chemotherapy agents, so I advise against administering these substances together until more is known about their combined effects in companion animals with cancer.

Additional anti-cancer herbs include curcumin and medicinal mushrooms. Curcumin has shown benefits for gastrointestinal cancer in humans,[ix] and medicinal mushrooms may boost immunity and lengthen disease-free survival times.[x] A recent study showed that an agent from the Coriolus versicolor (turkey tail) mushroom delayed metastases and increased survival time in dogs with hemangiosarcoma.[xi] While many dogs ingest medicinal mushrooms without side effects, I advise against using these and other immune-stimulating products for lymphoma, which is a cancer of the immune system. In lymphoma, lymphocytes are already multiplying out of control, so why promote even more cell division with herbs? Mushrooms may also negatively alter the activity of other chemotherapy agents.

Herbs Can Have Multiple Effects

Several plants with anti-cancer value double as anti-arthritis treatments because of their anti-inflammatory activity. Boswellia, a resin extract from the frankincense tree, helps humans with osteoarthritis by reducing pain and increasing range of motion as well as walking distance.[xii] A trial studying a boswellia product in dogs with inflammatory joint and spinal disease showed a marked reduction in their arthritis signs after six weeks.[xiii] Other anti-inflammatory favorites include bromelain, devil’s claw[xiv] and yucca. However, these plants may interact with aspirin[xv] and other anticoagulants.[xvi] Devil’s claw can interfere with cardiac medications.[xvii]

For organ health, milk thistle derivatives are some of the most commonly prescribed plant compounds in veterinary medicine. Silybin, a major flavonoid constituent of milk thistle extract, has been shown to have anti-cancer effects in several in vitro and animal models.[xviii] Studies in humans confirm that milk thistle benefits people with alcoholic hepatitis, viral hepatitis and toxin-induced liver disease.[xix] Many veterinarians recommend supplements containing silymarin, a milk thistle compound, for diseases involving the liver as well as for kidneys affected by gentamicin, a high-powered antibiotic that can be nephrotoxic.[xx]

Certain herbs may also be useful as aromatherapy. One study evaluated the effects of four essential oils — lavender, chamomile, rosemary and peppermint — on the behavior of shelter dogs.[xxi] Dogs exposed to lavender or chamomile aromatherapy spent less time barking and moving. Atmospheric peppermint or rosemary, however, created the opposite effect by encouraging significantly more vocalizing and physical activity. It’s interesting to think that relaxing shelter dogs with aromatherapy may help reduce noise stress and, in turn, increase their chances of adoption if they appear less anxious. Humans visiting the shelter may feel more peaceful, too, making for a more pleasant experience all around.

The plants mentioned here barely scratch the surface of the world of medical herbology for animals. We need more education, research and critical analysis of the ways in which we can use plants to treat dogs and cats more effectively and safely than medications, and owners need to use care in what they use to “self-medicate” their pets. With instruction now becoming available for veterinary students in training, however, I hope to start a trend where veterinarians can rationally consider the risks and benefits of herbs with the same in-depth knowledge and care with which we approach medications.

[xiv]Sanders M and Grundmann O. The use of glucosamine, Devil’s Claw (Harpagophytum procumbens) and acupuncture as complementary and alternative treatments for osteoarthritis.Altern Med Rev.2011;16(3):228-238.

[xvii]Sanders M and Grundmann O. The use of glucosamine, Devil’s Claw (Harpagophytum procumbens) and acupuncture as complementary and alternative treatments for osteoarthritis.Altern Med Rev.2011;16(3):228-238.

[xxi]Graham L, Wells DL, and Hepper PG. The influence of olfactory stimulation on the behavior of dogs housed in a rescue shelter.Applied Animal Behaviour Science.2005;91:143-153.