Home ›
Our Pet Experts ›
Caroline Golon ›
The Things We Do for Love: I Started a Guinea Pig Get-Together

The Things We Do for Love: I Started a Guinea Pig Get-Together 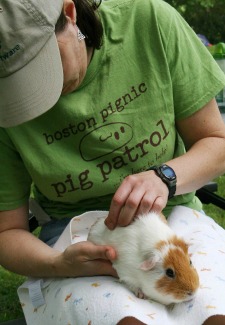 To avoid tripping accidents, human attendees are asked to kneel when next to the pens, and no other pets, such as dogs, are permitted at the events. Of course, throughout the day, the pigs are offered food, water and shade. In addition to being a fun, social get-together, area rescues are largely involved and often bring adoptable guinea pigs to meet potential new owners.

Over the last decade, the popularity of Guinea Pignics has increased, with events now held all over the world. Raabe says the biggest reason people attend is for the community aspect of it. “Imagine many, many guinea pigs cavorting in common pens in a park. The visual spectacle is both cute and educational,” she says. “People come to learn, to meet other people, or to simply enjoy a day in the park with pigs.”

Raabe left her original Guinea Pignic group when she moved from Boston to Virginia, but she regularly takes part in D.C.-area pignics and even gets together with her old pignic pals up north when she can. “Since I helped start the Boston Pignic, it holds a special place in my heart. I flew back for the June 2013 pignic!”

READ MORE: Small Animals, Living With Pets, Animal Rescue, The Things We Do For Love

READ MORE: Small Animals, Living With Pets, Animal Rescue, The Things We Do For Love