Home ›
Our Pet Experts ›
Caroline Golon ›
The Things We Do for Love: "I Throw Birthday Parties for My Dogs"

The Things We Do for Love: "I Throw Birthday Parties for My Dogs"

Caroline Golon, the human behind popular humor blog Romeo the Cat, will share the stories of pet owners who have gone the extra mile for their pets in this series, The Things We Do for Love. And sometimes, the extra mile is only the beginning! 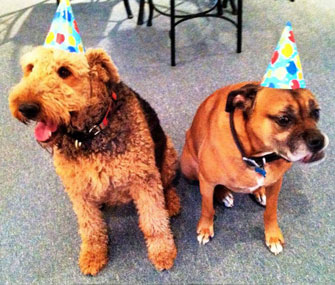 Jessica Stern of Cleveland, Ohio, dotes on her two rescue dogs: 11-year-old Miniature Dachshund Gracie and 8-year-old Boxer Dubs. And what better way to show her love than to celebrate their birthdays in style? Stern started throwing parties for Dubs four years ago … and the bashes keep getting bigger.

The first party Stern had for Dubs’ April birthday was low-key. She invited a couple of friends to a dog park, baked a cake for the dogs and let them run around together.

The party was so much fun that Stern decided to plan another one the following year. This time she invited her coworkers from her job at Embrace Pet Insurance. When company president Laura Bennett learned about the party, she suggested Stern have it at the company's offices.

Stern agreed and began planning the event. She soon learned that her coworker Michael Lambert had a dog whose birthday was close to Dubs’. The two colleagues decided to have a joint party, complete with cake, candles and gifts for Dubs and Lambert’s Airedale, Finnegan. The party was such a hit that Stern vowed to make it an annual tradition.