Home ›
Our Pet Experts ›
Caroline Golon ›
The Things We Do for Love: "My Dog and I Teach Yoga Together"

The Things We Do for Love: "My Dog and I Teach Yoga Together" 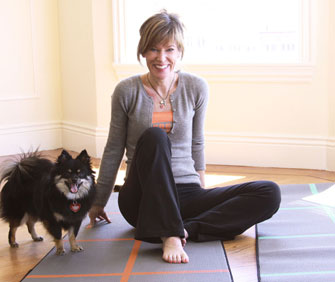 Anne Appleby knew her Pomeranian, Madison Avenue, was something special the moment she saw her, but she had no idea that Madison would become her yoga partner — teaching doga classes to people and their dogs!

Appleby, a San Francisco-area yoga instructor and founder of YogaForce products, first saw Madison online. “My friend had just gotten a little Pomeranian puppy, and I saw the pictures on Facebook and immediately said, ‘Oh, my God, that’s my dog!’” Of course, Appleby admits, that was an odd statement to make since the puppy already belonged to Appleby’s friend.

But in a strange turn of events, Appleby’s friend decided not to keep the puppy, who had turned out to be more work than she could handle. Appleby jumped at the opportunity to adopt Madison, and the two have been inseparable ever since.

Appleby starts each day with morning yoga. Soon after bringing Madison home, she noticed that the little puppy was copying everything she did during her morning routine. “She would literally mirror me,” Appleby says.

Appleby had heard of doga — yoga for dogs — so she did some research to find out if she had the skills and knowledge to teach it. It turns out, she did. Appleby approached the local recreation center, and they agreed to let her teach a series of doga classes.